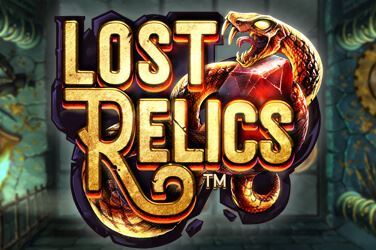 Everybody dreams of stumbling across some ancient treasure, and it’s hard not to be captivated by the romantic adventures of archaeologists like Indiana Jones, so live that dream out in real life as you play the Lost Relics slot game!

Dodge traps and snakes galore as you explore the secrets of the temple, and claim the long lost treasures within in this exciting and gorgeous looking slot game. But is this a prized possession or a load of old rubbish? Let’s find out in our Lost Relics slot game review.

Just try to imagine the classic ancient tomb from any number of films, games and TV shows, and you’ve just about got what they were trying to achieve in this slot. The view is of a tiled floor on which the reels sit, looking just like a trap in a movie, and either side is set up a lot of archaeological gear as if the archaeologists in the slot are going on an expedition. And sure enough, the reels themselves are packed with their finds, including daggers, helmets, bracelets and a strange jewel with a golden snake wrapped around it. All of this is extremely well done, looking fantastic with all of the shadowy ruins and choking vines setting the scene perfectly, and there’s even a crackling campfire casting shadows on the walls. You’ll truly be transported back to an earlier time, and you’ll struggle to find a spookier or more atmospheric slot out there.

Lost Relics slot game has a pretty different style of play from other slots you might be used to, and instead of landing between three and five symbols in a row to make wins, you must instead land your symbols in clusters of six. This can happen up, down, left and right on your five by five grid, with them just having to touch in order to generate wins. This has some positives and negatives for players, and while the smaller combinations of any symbol aren’t worth very much, you can create truly monster combos of all 25 spaces on the reels to win up to 6000x your stake! That’s no joke when you’re betting the maximum of £/€/$400 per spin, and those monster combos can turn into monster wins! No wonder this slot has an RTP of 96.3%!

If you’ve noticed the strange, metal contraption to the left of the reels, you will be pleased to know that it factors into the bonus round. It will fill up like a meter as you collect scatter symbols, and after three scatters have been found you are granted 10 free spins. There’s a treasure chest hidden below those tiles on the reels, and each cluster you win on the free spins unveils another section of the tiles, so that eventually you can uncover the whole thing. You get to keep revealing more chests until the spins end, at which point all the chests you have won are opened and you received the rewards within, which could be more free spins, sticky wilds or cash bonuses worth 30x your stake!

This game is worth playing for its interesting mechanics alone, but don’t let that make you forget how great the Lost Relics slot game looks, thanks to its amazing graphics and detailed design. With some big prizes in the offing too, it’s hard to find any faults with this fun and frenetic game, which allows you to chain together symbols to create monster combos and monster prizes!