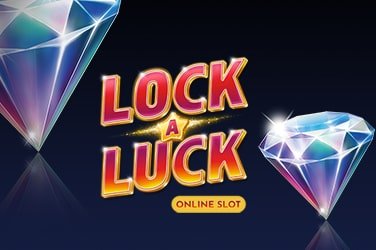 As the name implies, Lock a Luck is built around the famous locked reels mechanic, and like all games made to showcase a specific feature it rather depends on whether you like that feature to determine whether you’ll like the game.

Despite the rather basic premise this game actually manages to look really good, bringing a load of stylish elements into play to update the standard fruit machine look while still holding onto the aesthetic. But is that enough to help this game win your heart, or will you be locked out? Let’s take a look in our Lock a Luck slot game review.

Lock a Luck doesn’t pretend to be anything other than a souped up fruit machine with a single, fun mechanic to pick it out of the crowd, but it still manages to update the traditional fruity graphics and look really good in the process. The standard 9 – A symbols make up the lower value symbols, while the high value symbols are your favourite fruit machine icons including the Lucky 7, the cherries, the diamond, the horseshoe and the Shamrock. Some jazzy music and sound effects play over the top, while some whizzy animations help bring the game alive with flashes and little effects as you make wins.

In terms of the basic game mechanics you’re looking at a traditional five reel and three row slot, though it does bring 243 ways to win to the table, which helps mark it out as a little different. The top bet is lower than usual at £/€/$60 as a result, but expect the wins to come thick and fast! For a game with so many ways to win the 50x top prize in the main game isn’t actually too bad at 50x your stake, though it pales in comparison to the maximum win, which is 1333x your stake! The overall RTP is 96.37%, so you don’t have to go far to beat the odds.

There is only one bonus in this game, and it’s linked to the name of the game. Two or more reels are locked together on every spin in this game, meaning that they will both stop completely full of the same symbol, making it much easier to complete combinations, because you effectively get at least two free matching symbols with every spin. Sometimes all five reels will lock together, guaranteeing an instant maximum win, though sadly it isn’t possible for this to happen with the top paying diamond symbol. This might be the only bonus round but it’s a fun one, and at least it’s nice and simple for casual players to enjoy.

We happen to really like the locked reels mechanic, so this game had us hooked from the start. It’s a nicely executed version of the name sakes mechanic in a slot that looks really good thanks to some clean and well designed graphics, so it’s well worth a spin if you’re a fan!