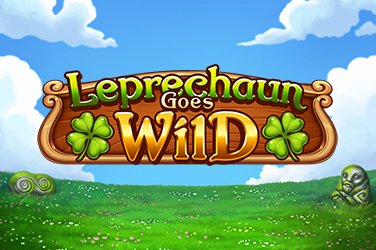 Regular slot players won’t be strangers to leprechaun-themed games but their charm and association with good old-fashioned Irish luck make them a staple for players across the globe as well as a popular blueprint for developers.

Play N Go’s Leprechaun Goes Wild slot game delivers a laid back version of an often overdone theme and in this review we will take a look at the facts and figures that will help us see how it stacks up alongside its rivals.

Leprechaun Goes Wild plays out on a peaceful valley backdrop, reminiscent of the Irish countryside, with a 5×4 playboard that isn’t the most traditional of dimensions but won’t be a detraction that will put off potential players.

There are 20 paylines for players to keep track of and while its high volatility may make some players irk on the side of caution, it does mean that wins are slightly more lucrative when they do come around.

As far as stakes go, punters can stake a minimum bet of $€£0.20 per spin, but for those of you who take an Austin Powers-esque stance of living life a little more dangerously, you can wager up to $€£100 as you look to plough the fields in search of their 10000x multiplier jackpot.

The Returns to Player (RTP) rate comes in at just over 96% which is above the industry average. It’s the sort of percentage that will bring in players from across the slot spectrum and combined with its bumper jackpot, the numbers make for pleasant reading.

Visually speaking, the layout is a very simple one but the game itself plays smoothly and that creates a nice ebb and flow to proceedings. The game plays alongside an uplifting, positive soundtrack that has that authentic Gaelic feel that combines with the visuals to create a game that’s full of charm.

Winning prizes is relatively straightforward, with players just needing to line up three matching symbols on one of their 20 paylines. These symbols are a combination of playing card values, coupled with traditional Irish-themed slot items, such as pots of gold and smoking pipes.

There are also three features to keep an eye out for, with their aptly-named Luck of the Irish feature triggering when you match up at least two clover scatter symbols, while the game’s Wilds come in the form of, you guessed it, up to five leprechauns that offer multipliers of up to 40x your stake.

You would be forgiven for thinking that Leprechaun Goes Wild is just another Irishy slot game, but the game delivers a perfectly executed concept that offers fun at every corner. A relaxing soundtrack takes you back to much simpler times, while smooth spin-to-spin transitions make it one of those games you will always have a soft spot for, especially if you chase down the pot of gold at the end of the rainbow…