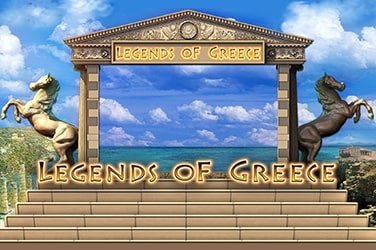 Ancient Greece is up there with ancient Egypt and the Viking age as one of the most popular historical settings for slot games, probably because of the legendary wealth and luck of some of the Greek myths’ most famous heroes, so can new games add anything to that legacy?

Legends of Greece certainly thinks it can, and plays the Greek myths trope as straight as you can get, using 3D graphics to depict a world of gods and monsters playing games with the fates of us poor mortals. But are there triumphs to go along with the disasters, or is this more of a Greek tragedy? Let’s find out in our Legends of Greece slot game review.

Modern games often play around with our expectations of what a slot game should look like, coming up with inventive ways to present familiar settings, but this game isn’t one of them. Legends of Greece looks just like you probably imagine, with white marble temples and statues as far as the eye can see, while familiar images from the Greek myths crop up as symbols on the reels. A grand Greek temple serves as the border to this slot, with two rearing horse statues to either side, while Minotaurs, Hydra and Gorgons, sit alongside swords, helmets, bows and shields. Aside from all this spectacle there are also fun animations and a relaxing Greek soundtrack to go with the game and really build on the theme.

The mechanics of this game are fairly typical, with five reels and three rows to play on as well as 20m pay lines on which you can bet a maximum of £/€/$25. If you’re slightly disappointed by the low betting limit in Legends of Greece then you’ll be perked up by the potential prizes in the game, which sees the top payout of 6000x your stake for five images of Pegasus on a line followed closely by the Mermaid which offers 1200x your stake. This means that even this low betting limit will provide big wins if you land the right symbols, which is good, because the very low RTP of 91% will require you to land some big wins in order to overcome it.

Luckily there are a few bonus symbols in play to help you do that, with three special symbols offering different powers: Zeus is the wild symbol, and he fulfills the normal functions of a wild, substituting for other symbols to help make combinations. The Medusa free spins symbol activates the free spins game, which grants you a maximum of 20 free spins when you land five of them, while also tripling the value of anything you win in the bonus round. Finally the warrior symbol is the scatter, which pays out up to 100x your stake regardless of where it lands on the reels.

The Legends of Greece slot game manages a perfectly well executed turn as an Ancient Greek themed slot game, but really comes into its own when you discover the amazing prizes on offer. It’s not a game for the faint hearted, and many heroes have found themselves undone by this game’s cruel tricks, but all it takes is a few lucky spins to be on the end of a legendary £/€/$30,000 jackpot!