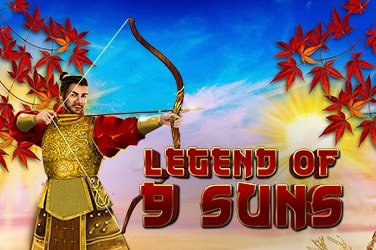 A little lesson to start this review: In Chinese mythology, the archer Hou Yi was tasked with punishing the ten suns that used to live in the sky for making the Earth too hot. When they wouldn’t listen to his warnings he shot all but one out of the sky, transforming them into ravens as they fell to the ground, and leaving us with the single sun we know and love today.

Now you know a little bit more about the story behind Legend of 9 Suns, hopefully the visuals will make a bit more sense. In general this game is fairly typical of historical themed games made for the Asian market, with plenty of Chinese iconography present in the borders of the reels, while all of the symbols from the people to the horses, cakes and tea set are all typically Chinese in design. The lower value symbols are the standard 9 – A re-designed in a Chinese style, which is less impressive, but you’ll love the atmospheric Chinese music and the clever animations that bring this slot to life.

The Legend of 9 Suns slot game is mostly about its Wilds, which is fun and simple thanks to its standard three row and five reel layout. There are 25 pay lines to play on where you can bet a maximum of £/€/$50 per spin, while the top prize isat £/€/$20 for five of the sun wilds or the archer symbols, the game has an RTP of 95.98%.

Thankfully our faith was rewarded in the form of a couple of interesting bonuses. The first is the wild suns feature, which can be randomly triggered after every spin in the main game. The archer takes aim at the suns in the sky in a little animation, at which point the nine suns appear on the screen pierced by arrows before crashing down onto the reels, which can result in them turning a maximum of nine symbols wild. A second bonus is a more conventional free spins option, activated by landing up to five bottle scatters that can provide as many as 20 free spins, while the wild suns can also appear in this round and boost your score further. Finally the coins feature may also activate at random, turning the border of the reels gold and opening a second 3×3 reel in the centre of the screen. The reels will spin and three coins will land on them with a value on each, winning you the value on each coin as multiples of your stake.

The Legend of 9 Suns is a fun representation of a Chinese legend that many Western players might not have heard of, so you can play and learn at the same time. If you’re more of a take the money and run type then have no fear, because there’s plenty to win in that area too!