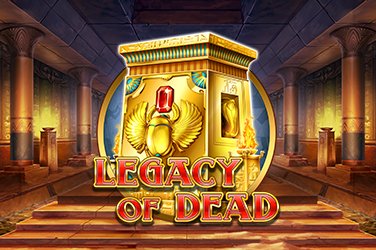 Play N Go’s Legacy of Dead is a slot game you’ll know about unless you’re a total newbie, as it’s one of the biggest slots around at the moment and part of a mega-hit series that began with Book Of Dead. The first slot in this series has set the standard for Ancient Egypt-themed slot games in recent years, so is this new game a worthy successor or a same-old copy trying to cash in?

Let’s take a look in our Legacy of Dead slot game review.

Legacy of the Dead slot game looks very similar to its predecessor in terms of the setting and the symbols, and whether that’s a good thing will depend on your experience with the series. It undoubtedly looks and sounds really good, with detailed and high-resolution symbols lending the whole package an air of quality. The low-value symbols are represented by the generic 9 – A icons, which have been given a golden Arabic makeover, while the high-value symbols are bejewelled Egyptian artefacts like scarab beetles, death masks, statues of Anubis and golden reliquaries. However, fans of Book of Dead may be disappointed that it all feels very familiar, and not much has been added design-wise.

In terms of the mechanics, the slot is a standard five-reel, three-row affair with a betting range that falls between £/€/$0.10 and £/€/$100 per spin. This makes for some potentially tasty payouts in the main game, where the highest paying symbol of Tutankhamun results in a payout of 500x your stake if you land five on your reels. Overall the RTP stands at 96.5%, which is a bit above average for a modern slot.

The Legacy of Dead slot game has one very powerful symbol, the golden reliquary, which acts as a wild and a scatter at once, and also equals Tutankhamun as the most valuable symbol paying 500x your stake for five in a combo. Landing these symbols also opens up the bonus feature, which grants you an extra cash payout up to 200x your stake depending on how many scatters landed, as well as 10 automatic free spins. The beginning of the free spins segment sees the game choose a symbol at random to become the special symbol, though you’re hoping for this to be as high value a symbol as possible, meaning that when it lands on the reels during free spins it expands to take over the whole reel.

Not only that but the special symbols payout when three of them appear anywhere on the reels, so they pay even more than you’d expect. The dream scenario here is to have your special symbol grab every slot available for a really huge prize, though you can also re-trigger the free spins by landing three more scatters during the bonuses. The new special symbol chosen then plays alongside your existing one, so you can theoretically keep activating free spins and play with up to nine special symbols at once.

For new fans of this series Legacy of Dead is a must-play, especially if you like Ancient Egypt. It’s got it all: Great graphics, great sound, fun game mechanics, interesting bonuses and big payouts. Existing fans may be disappointed that there aren’t many changes from Book of Dead, but if you liked the first one that means you’re going to love this one too!