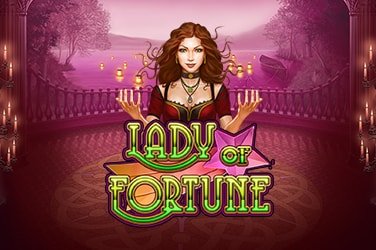 You need a lot of luck to go along with your daring if you’re a slot player, so it’s probably a good idea to play a game that’s literally all about luck in order to boost your chances a bit. And that’s exactly what you get with Lady of Fortune, who brings enough lucky charms with her to get Port Vale to the Premiership!

There’s definitely magic in the air in this slot, but will you be charmed or is it all just a big trick? Let’s take a look in our Lady of Fortune slot review.

The general air around Lady of Fortune is actually a little spooky, and whether she’s a witch, a psychic or a fortune teller isn’t made clear, but she certainly has all the right gear with her. The background to the slot certainly has a witchy feel to it, covered by a lamp lit and gothic inspired park tinged with a purple haze with stacks of candles to the left and right of the screen. The symbols are similarly ritualistic, and include just about every symbol of luck you can imagine, such as dice, ladybirds, shooting stars, four leafed clovers, horseshoes and even a lucky rabbit’s foot. It’s quite a quiet slot without background music, but mystical sound effects accompany your wins as well as ethereal animations.

Lady of Fortune gets a lot less mysterious when you look at the mechanics, however, which are fairly simplistic and won’t provide too much of a challenge. There are five reels and three rows to play with, while there are 15 pay lines on which you can bet up to £/€/$75 per spin, which is lower than usual but not exactly tiny. This game really is as simple as spin and win and aside from the wild symbol, a golden box with a multiplier up to 5x on it, there’s not much else to mention in the base game. These wild multipliers can be handy though, especially to help boost your way out of a lower than average RTP of 95.70%

There’s one bonus in this game and it’s a pretty simple pick and win, activated by landing three of the Lady of Fortune scatters on the reels, at which point all you have to do is pick one of these symbols for a cash prize. It’s short and sweet, but while it might be lacking a little in detail at least the top prize is a hefty 800x your stake, which is more than enough to chew on! There’s also a gamble feature that players might enjoy, enabling you to double your money after every win by guessing the right card colour, or quadruple it by guessing the right suit. You can even guess up to five times in a row, doubling or quadrupling the mount every time, so there’s plenty to win if you have the stomach for it!

The Lady of Fortune slot game is a simple title at heart, combining impressive visuals with a straightforward set of mechanics that you can pick up and play any time without much effort. On top of the simplicity there are also some great prizes available to make it all worth your while, and some fun little bonuses too.