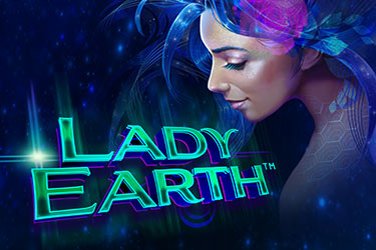 It’s time to take a trip through space and maybe even your inner thoughts with Lady Earth. There’s a pretty spaced out theme on offer in this slot game, which combines out of this world visuals with some traditional elemental symbols combined with the signs of the Zodiac to make a mash-up of various traditions that’s guaranteed to relax you and hopefully, help win you some cash at the same time.

But is Lady Earth the real deal, or does it need to come back down to this planet? Let’s take a look in our Lady Earth slot game review.

There are a lot of things about this game that are a little different, and we can start by looking at the visuals. Most slots like to keep it simple, so the fact that Lady Earth has gone for a sci-fi look is enough to get it a tick in our book, with a glimmering starscape as the background and the ethereal figure of Gaia taking up the left hand side of the screen. The symbols themselves are a combination of elemental and Zodiac signs like earth, air and fire as well as the rabbit, fish and scorpion, adding further to the game’s new age cred. There’s a suitably space age sound track in the background, while jingly sound effects and flashy accompany your winning combinations.

There is a lot to talk about in terms of the gameplay as well, because Lady Earth has a lot bigger playing area than you might be used to. Five reels and five rows fill the screen, and with 51 pay lines and a huge betting limit of £/€/$300 per spin there are plenty of options for you to maximize your wins when you manage to land them. The price for this generosity is that the symbols themselves don’t pay all that well, with fire and water paying the most at just 2.75x your stake for five, though that still adds up to a lot if you’re playing near the maximum. The RTP is nice and high at 96.8%, so there’s no need to worry that you’re getting short changed!

The Lady Earth slot game is one of those rare titles that provides most of its rewards in the main game, but there are still a couple of bonuses for those who like their variety. The first of these can land on any winning spin, and holds all the other reels, while the winning symbols re-spin individually to generate another win with a randomly chosen symbol. If there are already examples of that symbol on the reels then these are added to the re-spinning symbols and you get another re-spin, a feature that repeats until there are no more symbols to add. The second bonus is a multi-level pick and win game, in which players choose from nine squares to turn over, under which are cash prizes and multipliers as well as coins and skulls. Collect four coins to move on to another layer of the game, or collect three skulls to leave the bonus and play the main game again.

Lady Earth is a strange looking slot that impressed us with its cosmic theme, and we also liked that it’s a game that enjoys going big. The playing area is big, the betting limit is big, and while the prizes aren’t massive there are plenty of opportunities to boost the games that you do win and land a fortune.