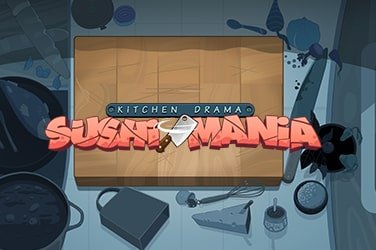 Food themed slots have always been a popular choice for slot developers, and there seems to be something about the sight of delicious snacks that makes players want to keep betting, so it’s not a surprise to see another foodie slot come out of veteran studio NoLimit City.

Kitchen Drama is a new series by the Swedish designers, and its first game is Kitchen Drama Sushi Mania, which takes the Japanese theme and runs with it to great effect. In true Manga style even the vegetables have cute little faces on them, with big watery eyes that will make you think twice about slicing them up and wrapping them in seaweed, while rice balls, jugs of Sake, pots of Wasabi and chunks of salmon join them on the reels. The background music isn’t entirely matched to the theme, but it’s a sort of jazzy tango beat that’s nice to listen to, while the animations that accompany the action are vibrant and charming too.

As with many NoLimit City slots, Kitchen Drama Sushi Mania uses a cascading reels mechanic in which winning combinations are removed to be replaced with new symbols that fall in from above. This effectively gives you a free re-spin after each winning combination, meaning you can string together a series of wins and get loads of free spins as a result. There are five reels and three rows to play with, as well as 20 pay lines, while the top bet of £/€/$100 is a good option for high and low rollers alike. All these factors, and the top prize of £/€/$100,000 in one spin, give this game an impressive RTP of 96.77% – so there’s plenty to play for.

There are a few bonus features to watch out for in the Kitchen Drama Sushi Mania slot game, the first of which is the Bunshin wilds feature, activated by landing one of the little blue symbols dressed as a ninja. When you do, more of these wilds win drop in from the top of the screen and replace other symbols on the reels, potentially generating some tasty wins. The other two games are represented by the features on the left and right of the reels: To the left is a meter showing which symbols you have to land in order to activate the game, after which you get 10 free spins with extra sushi wilds. To the right of the screen is another meter you must fill by getting three consecutive wins, at which point you get an extra free spin with added sushi wilds on the screen.

Kitchen Drama Sushi Mania is a wacky, fun game with some excellent visuals that really bring the whole theme alive, but don’t let that fool you into thinking there aren’t some great prizes to win as well! The cascading reels mechanic and the bonuses all add up to some great wins, which can make you rich!