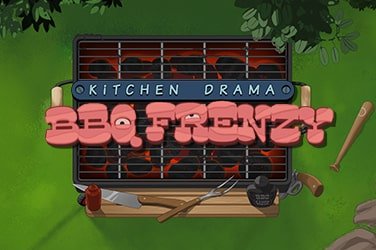 If you’re looking for originality in your slots you could do much worse than the Kitchen Drama series by NoLimit City, which seem to be the result of a competition to see how many themes the developer could fit into one slot.

Kitchen Drama: BBQ Frenzy can’t decide whether it wants to be about food or the Wild West, so it went with both, a choice we like very much. The setting is an outdoor barbecue, and the reels are to be found on the grill of that barbecue, where all manner of food related symbols are to be found. These wacky little guys have cartoonish human faces, and some of them are also dressed in Wild West outfits like Sheriff hats and Native American headdresses, and include everything from peppers and corn on the cob to steaks and aubergines. The lower value symbols are a few different types of grumpy looking charcoal, but at least they’re all original. The symbols dance, spin and disappear in puffs of smoke in a series of excellent animations, though the sound is rather limited.

This is a cascading reels slot, so keep an eye out for that familiar mechanic that removes winning combos from the reels and replaces them with new symbols from up above. This effectively gives you a free re-spin after every winning combo, and you can string together long chains of wins without paying for a new spin each time. The betting limit is nice and high at £/€/$100 per spin, while there are 25 pay lines to be on, giving you plenty of options, and the highest paying chili symbol rewards you with 200x your stake. With an RTP that’s nice and high at 96.7%, there’s plenty of good news for players in this slot!

Alongside the fun and generous gameplay available in the Kitchen Drama: BBQ Frenzy slot game’s main game, there are also a couple of fun bonus rounds that will give you a bit of diversion and help your bank balance too. The first is the Spirit Spins feature located to the right of the screen in the form of a frowning totem pole, activated simply by landing three consecutive wins. This gives you a single free spin, but with a randomly chosen symbol becoming wild. The second game is activated when you form wins consisting of the three kebab ingredients to the left of the reels, which gives you five free spins, but also access to the Sheriff wild. This is the same steak symbol wearing a sheriff hat and badge, which not only grants you a multiplier up to 15x for every instance that appears on the reels, it also becomes a walking wild that hops one reel along for every spin until it falls off the side.

Kitchen Drama: BBQ Frenzy is a visual rollercoaster of a slot, promising some great looking graphics and some zany symbols that add plenty of charm and excitement to the theme, while the fun game modes provide excitement and prizes in equal measure.