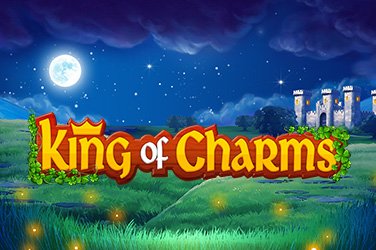 King of Charms takes players to the Emerald Isle i.e. Ireland, with Inspired Gaming putting out some clever Irish-themed symbols on the reels which can deliver big wins if you have the luck of the Irish with you.

The game logo itself has a leprechaun, which makes the theme pretty clear right from the start. The reels are placed on a background of a lush green meadow, with mountains in the distance, and a castle towards the right of the screen as well. All the symbols in the game are themed, with a distinct Irish influence, and the music is also suitably provided – all in all this does create a very specific environment, and can even transport you to the island through the overall ambience. The reels have gold borders at the edges, with little trails of four leaf clovers along the rest of the borders, again reinforcing the theme.

The game has five reels and three rows with 10 fixed paylines. Players can bet from $/€/£0.10 up to $/€/£100 per spin. You pick up wins by landing at least three matching symbols from left to right on a payline, with some of the high-value symbols giving a pretty decent return on your bet. You have the option to Autoplay as well if you want to speed up gameplay.

Even the standard card royal icons are themed, while the actual themed symbols include a pot of gold, a four leaf clover, a silver horseshoe and a ruby heart. There are no Wilds or Scatters in this game, while the leprechaun does show up during the Hot Spins round.

The Hot Spins round is activated by landing any win worth 4x of your total wager. When this happens, the single grid will split into four, with all four of them spinning to try and generate wins for you. The leprechaun can land during this round and acts like a Wild, substituting for other symbols to create winning combinations. The Hot Spins occur fairly regularly, and this makes this potentially quite a rewarding feature, especially as the RTP during this round is 100%

This is a medium variance game with an overall RTP of 95.51%

While this is a pretty basic and standard slot game, the Hot Spins feature adds a lot of variety and winning potential, especially as it can get triggered quite frequently. This makes this game quite an enjoyable and potentially rewarding option for slot game fans.