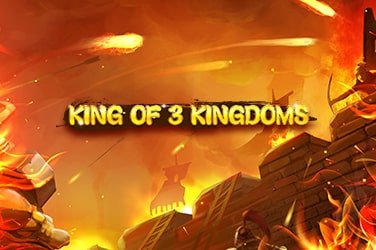 King of 3 Kingdoms is a slot by NetEnt set in the volatile period of Chinese history known as the time of the Three Kingdoms, during which three rival Emperors fought for control of all China from their power bases scattered around the country.

The Jin dynasty that came out on top only lasted for just over one hundred years before there was another bloody civil war, but there’s always a chance that you might do one better and build a fortune that lasts forever! So will you become Emperor, or flee in disgrace? Let’s take a look in our King of 3 Kingdoms Slot review.

The King of 3 Kingdoms slot game has the look of an epic Chinese costume drama about it, with a background composed of a bamboo scroll on which the grid can be found, while the grisly aftermath of a battle can be seen highlighted in red behind it. The low value symbols are the standard 9 – A drawn in the style of Chinese calligraphy, while the high value symbols include portraits of the three kings alongside traditional Chinese icons like a golden dragon statue and Chinese warriors. Dramatic traditional Chinese music plays in the background, and sound effects like cymbal crashes and drum rolls accompany your wins.

This slot has a theme that resembles many of the martial, ancient Chinese slots that have come out in recent years, but the mechanics of this game make it a cut above the rest. King of 3 Kingdoms has a 243 ways to win system on the five reel, three row layout, while a maximum bet of £/€/$125 means that there are plenty of chances to maximize your wins. The top prize of 60x is represented by the Blue King, eventual winner of the war Sima Yan and future Emperor Wu, and is a pretty good deal on that basis, making for a large prize if you bet high. Even more opportunities in the bonus round explain the excellent RTP of 96.88%

The game gets even more exciting when you factor in the bonus round, and though there is only one of these, it’s a generous one. You can activate the free spins feature by landing up to five scatters, which grants you up to 25 re-spins, all of which have wins benefitting from a 3x multiplier. You can also re-trigger the bonuses from within the free spins, granting you another 25 spins if you’re lucky. There is also a wild in the shape of a map of the Three Kingdoms, and while this does nothing special beyond substituting for other symbols, it’s an extra little something on top.

The King of 3 Kingdoms slot game has impressed us, this is a well put together and fun slot that’s got a few mechanics that any player will enjoy. The extra bonus rounds are the cherry on top, adding some excellent prizes that have the potential to turn your life upside down with just a few spins!