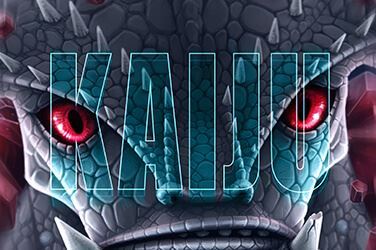 The ancient Japanese monsters known as Kaiju have gained a lot of exposure in recent years as the villains in movies, video games and comic books alike, and now it’s time for their slot debut! In Kaiju by Swedish outfit ELK Studios you take on the role of Japanese cyborg HA-42 as you battle three of the gigantic creatures to save the futuristic version of Tokyo they threaten.

This game is definitely well made and immersive, but is it rewarding as well? Let’s take a look in our Kaiju slot game review.

ELK have a great track record of developing really well-made slots, and the Kaiju slot game is no exception, launching you into this game’s world with some quick and flashy cutscenes that introduce the main character, cyberpunk inspired Tokyo and the grizzly beasts that threaten to destroy it. The reels themselves are backed by a cool blue street scene where holograms replace signs on buildings and the streets pulse with electrical circuitry. For a game so big on content there aren’t actually that many symbols, just six in total, comprising three colours of ID card and three colours of glowing gems. On top of that, there is also the wild and the scatter, represented by the word Wild and HA-42’s face respectively. The game really nails the edgy manga theme from countless comics involving Kaiju, so fans of the medium will be in heaven.

The main game doesn’t deviate too far from the norm, bringing three rows and five reels to the table alongside 243 ways to win, and a potential maximum of 7776 pay lines in the bonuses, though the payouts are calculated strangely: Wins are all divided by 100, so even though you can bet 100 coins you’ll receive much less cash than if you won a simple multiple of your stake. That’s disappointing, but understandable when you consider the massive jackpots that the bonuses can result in, maxing out at 1036x your initial bet. There’s also the concept of reel expansion to contend with. Match three symbols vertically in a row and a wild will appear above that reel, expanding the number of ways to win and potentially adding large combos to your score. All in all the RTP of this slot falls in at 96.3%, so the unusual payout method clearly doesn’t harm your chances too much.

At this point, you’re probably wondering when you actually get to kick some Kaiju butt, and your answer comes in the bonus rounds. These rounds really mix up the format, allowing you to generate wins outside the normal reels thanks to the awesome laser weapon that you’ll be using to fight the baddies. Land three HA-42 scatter symbols on the reels and you’ll be given seven free spins with a randomly assigned Kaiju enemy, who will have one of three powers. The first Kaiju allows you to fire your laser at the symbols and keep any expanded reel wilds you have achieved for the rest of the game, potentially hugely increasing the number of ways to win. The second Kaiju has a couple of hotspots on the reels, highlighted areas that convert all the symbols inside them into wilds if you match three vertical symbols through them. Finally, the third Kaiju also employs the hotspot mechanic, but any symbols that become wilds in this case also become sticky wilds that stay in place for the rest of the game.

We can’t fault ELK Studios on their inventiveness in this slot, using clever mechanics and great visuals to really capture the feel of a futuristic monster disaster game straight out of Japanese manga comics. While the wins are a little on the low side, primarily thanks to a weird payout mechanic, the extra bonuses and fun side missions are enough to keep you occupied anyway.