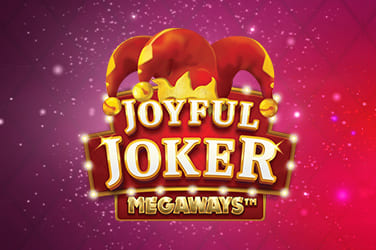 All41 Studios has kept things rather simplistic with the visuals that they have provided in this game, as this Joyful Joker Megaways Review found them to be exactly that: joyful.

The game features a number of classic and plain backgrounds depending on the screen that is visited, however the main background of a pink/purple diamond scheme works rather well with the golden playing grid. This grid consists of 6 reels and allows for icons to appear in a range of different formations, with between 2 and 7 able to land. This results in allowing for up to 117,649 different paylines to be available to win from!

A minimum bet per spin of $/€/£0.20 has been made possible, although a maximum bet of $/€/£20 is also available to those who wish to wager with a bigger balance.

When taking a look at the paytable for this Joyful Joker Megaways Review, it became clear that All41 Studios decided to keep things as joyous as possible as they have kept things following a rather traditional and classic theme.

The symbols utilised include many of the traditional fruit machine icons, including cherries, lemons, oranges, plums, grapes, watermelons, horseshoes, bells, and bars, as well as the 7s. Additionally, the diamond icon also makes an appearance in this Joyful Joker Megaways slot, but is the game’s wild and can substitute for all regular paytable symbols.

There are a handful of Joyful Joker Megaways Bonuses available to trigger, with All41 Studios keeping things as simplistic as possible.

A common feature that is included as one of the Joyful Joker Megaways Bonuses is the inclusion of the ‘Rolling Reels’ mechanic, which is typical with many Megaways slots to have been created. This mechanism will see winning icons be replaced by new ones to try and encourage even more wins to be made, thus improving the total payout on that initial spin.

An additional Joyful Joker Megaways Bonus is the ‘Joker Spins’ feature, which will be triggered randomly on any winning spin that takes place. Here, the wheel to the side of the playing grid will become utilised as a multiplier between 2x and 10x will be added to the next Rolling Reel win obtained. If consecutive wins are made, then the win multiplier will continue to increase. If free spins are triggered, then the multiplier will start where it ended up before the game starts.

If players are able to land a minimum of four joker icons – the game’s scatter – then they will trigger the top Joyful Joker Megaways Bonus. A free spins game where a minimum of 10 spins will be awarded a win multiplier for each win made is attached; continuing to increase with each consecutive Rolling Reel win. Players who land five of these joker icons will receive 12 free spins whereas six or more will provide 14. The game can be retriggered when three or four of the jokers appear on the Bonus reel, with three or four extra free spins provided.

The final of the Joyful Joker Megaways Bonuses is the ‘Bonus Buy’ feature, which will allow players to access the free spins game immediately with 10 free spins at a cost. Players can either spend 80x, 120x or 150x the bet to trigger it, where they will get a win multiplier of 2x, 3x or 5x, or 5x or 10x respectively to begin with!

This Joyful Joker Megaways Review found that the return to player (RTP) rate for this All41 Studios title is 96.25% and comes with a high level of volatility.

You will want to play this slot after reading this Joyful Joker Megaways Review, as it is a title that provides bettors with a simplistic experience but is equally as rewarding. With a throwback theme followed by a modernised mechanic, this title from All41 Studios can be enjoyed by anyone!

If you are joyful at playing something new, why not play the titles Jungle Jim, The Twisted Circus, Untamed Giant Panda or Big Kahuna.