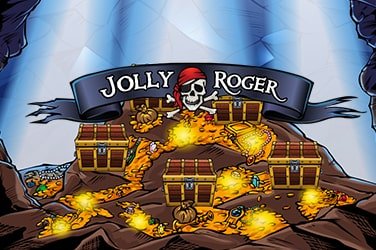 Bespangle your bandana, straighten your eye-patch and wave goodbye to your onshore sweetheart as you prepare to take to the seas and head off to enjoy PlaynGo’s swashbuckling pirate-themed Jolly Roger slot game.

This great and unique offering is by far one of the most aesthetically pleasing slot games on offer. The vivid and lively colours together with the well-designed symbols will make you feel as if you have entered another world; the world of cannons, parrots and treasure chests bursting with bonuses. The game’s sea soundscape that plays in the background really sets the scene and we love the sound of the gently lapping waves that accompany the gameplay. The sound of the reels turning is also satisfying, and the shanty inspired sound effects that accompany a win and payout add to the charm and jollity of the game.

The on-theme bonus games are great in this title and really enhance the gameplay. There are two great options on offer. Firstly, if you land a series of treasure chests on the reels you will soon find yourself in a dark and damp cave filled with treasure chests where you will be given the opportunity to multiply your stake. Collecting three pieces of a ripped treasure map on the reels will give you a chance to dig for buried treasure. Just remember – X marks the spot! The bonus games are as fun and engaging as the main gameplay, but they don’t take too much time and are welcomingly simple to operate and to play. There is also the added detail of your crew cheering you on and reacting to your choices in the bonus games. They certainly sound like a lively bunch!

In the main game, you will find five reels and 15 pay lines. There are plenty of chances to win and with an RTP of 95%. The wins seem to come thick and fast and information about prizes and payouts was clear but not intrusive. The Jolly Roger is the wild symbol (of course) and can be used in all combinations on the reels. Other symbols include diamonds, ruby rings and cannons. There is also a rather fearsome looking pirate with a blade between his teeth – not someone you’d like to meet on a dark night!

The autoplay option offers you a simple and sleek interface with which to set limits and stakes. The sliders are simple to use, and once coupled with the quick play feature, you will be spinning and winning with ease and in style.

Above all, we love the design of this game. It looks great, it is intuitive and the music and sound effects bring it to life in a way that makes it really engaging to play. It is fun and varied without being complicated or intricate. We highly recommend it for some great gameplay and a guaranteed ticket to a good mood.