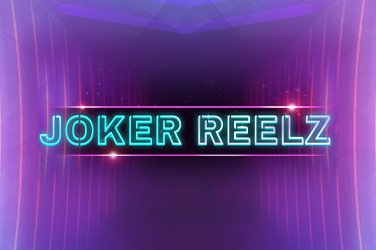 Despite the leaps and bounds in quality that have been achieved over recent years, many slots players still hanker after the exciting simplicity of older style slots with high paying symbols and big wins in a single spin. That’s why many developers have been trying to hit that sweet spot, the excitement of old school slots combined with the graphics and mechanics of newer slots.

Joker Reelz is one such attempt by Tom Horn Gaming, bringing the symbols and simple gaming we know and love but combining it with the latest visuals. But will this Joker have you laughing all the way to the bank or is it a bust? Let’s take a look at our Joker Reelz slot game review.

Joker Reelz immediately shows you the look it’s trying to pull off when you first see the screen, which combines a more modern five-reel and three-row setup with the old-style symbols that older players will remember from physical machines. There’s nothing too fancy about any of it, with a star-studded background and lights all around the borders of the reels, while the low-value symbols are represented by card suits and the high-value symbols are represented by old favourites like BAR and Lucky 7s. That said, this game doesn’t lack polish, and all these simple concepts are beautifully executed with crisp modern graphics and fun little animations that bring the game to life.

So this game is all about blending the old and new together, which is obvious in the style, but what about the gameplay? Well, the first thing that’s unusual about this game is the relatively few pay lines to play on, with just nine to cover all five reels and three rows, though with a betting limit of £/€/$100 and a maximum paying symbol of 50x your bet that’s not going to impact your wins too much. Another interesting feature is the Joker from the title, who awards you a re-spin on top of your wins from that spin whenever he lands. Not only that, but whenever a wild lands during that re-spin you get another re-spin on top, and these only stop when no more wilds land on the reels. Another modern touch from Joker Reelz and another positive for your bank balance! The RTP is exactly average at 96%, so there must be some money to be made here after all!

The Joker Reelz slot game remains retro at heart, so in common with older style games there aren’t a huge number of bonuses included and there are no separate bonus rounds or free spins. However, another feature which may interest you is the towering symbols mechanic, which randomly combines adjacent reels to create truly enormous symbols that can take up large areas of the reels and generate big wins. The maximum jackpot in this game is £/€/$5,000, a respectable sum, and you’ll rely on these features to achieve it!

Joker Reelz is an excellent modern take on a classic slots format, and while it may not have all the pizzazz and polish of a slot on the modern style, it still has a few tricks up its sleeve. This game brings the exciting, win a minute action of traditional slots and adds a few modern touches to make something that’s retro, with a twist!