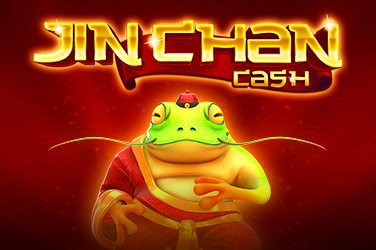 It’s time to welcome Jin Chan back to our screens for another slot featuring the famous Chinese money toad, a Feng Shui symbol of wealth and prosperity who understandably makes lots of appearances in Chinese themed slots.

Jin Chan is the star of Jin Chan Cash and seems to be a happy enough little fellow even though he only has three legs, and it’s probably a good idea to get on his good side if you want to win lots of cash. But is Jin Chan smiling on you, or do you have bad Feng Shui? Let’s take a look at our Jin Chan Cash review.

Luck seems to be the big theme of this slot, with just about every single one of the high-value symbols being represented by some lucky icon or creature from Chinese mythology. Dragons, Phoenix, firecrackers, lanterns and dancing dragons make up the best of the imagery in this heavily China-inspired slot, and while the low-value symbols are represented by the standard 9 – A symbols, even these have a Chinese style makeover. It’s a fairly pared back slot without too much in the way of bells and whistles, but some charming animations and soothing music at least make it quite engaging to play. It’s hard not to get excited when you see the familiar deep red background and golden reels, because you know there’s cash on the way!

The real symbols to watch out for in this game, however, are the Chinese coin and Jin Chan himself, because they allow you access to the big earner in the Jin Chan Cash slot game, which is the cash collector respins round. The whole game is pretty much geared up to getting you there, and while there is a bit of money to be made in the main game you’ll be hoping for those special symbols to line up. The slot has three rows and five reels, while there are nine pay lines to play on, and players can bet up to a maximum of £/€/$60 per spin. The distinctly average RTP of 95.89% means that you can’t rely on regular wins in the main game to make it big, so you’ll be looking for the bonuses as quickly as possible.

Thankfully the bonuses are not a problem in Jin Chan Cash, and all it takes is for six of the lucky Chinese coins to land on your reels alongside Jin Chan for you to be taken into the cash collector round. Cash Collector is a mechanic that Inspired Gaming use quite a lot, but it’s still a fun and lucrative model: Your initial six coins and Jin Chan stay fixed on the reels, which spin around them for five free spins, only landing new symbols when more coins or Jin Chan images land on the reels. All of these stick until the five spins are up or the reels are full, at which point each of the coins drops a random value up to 25x your stake into the mouth of the first frog you collected. But wait! If you managed to collect more than one Jin Chan frog, the value will be deposited again into the second frog’s mouth and again into a third if you have one. That’s a heck of a lot of cash!

Jin Chan Cash looks and sounds excellent with all of the Chinese inspired artwork, it’s nothing you haven’t seen before. Having said that this game’s big attraction is the cash collector bonus, and if you like that game then you’ll be in heaven because it’s an extremely lucrative bonus that can make you very rich!