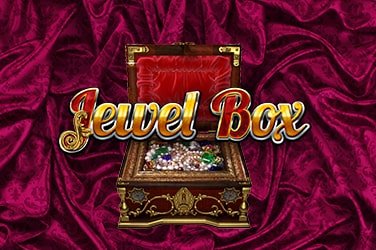 These days most people can go days or weeks without seeing any paper money thanks to contactless payment and card machines that remove the need to carry change, but there’s nothing quite like the sight of shiny objects to make you feel really rich.

That’s why it’s a nice change to see all that gold and silver nicely represented in Jewel Box, a slot game that puts the shiny stuff front and centre to remind you what really matters, not just numbers in your bank account. But will this game help you on the way to the real thing? Let’s find out in our Jewel Box slot game review.

We can’t take any points off this game for effort, because the developers clearly went out of their way to make it as lifelike as possible, but compared with the slick and modern design of the latest slots Jewel Box comes out looking pretty dated. That said, it’s at least highly detailed and nicely original, with gems from emeralds to rubies and diamonds making up the low value symbols while completed jewels make up the high value symbols. There’s not much to talk about in the way of animations or sound effects either, but the theme works overall.

While not as spartan as you might find some of the old three reel fruit machines, the Jewel Box slot game is pretty stripped back by modern standards, and while some players may appreciate the simplicity and ease of play others will hanker after a few more features. It’s got a standard issue five reel, three row layout with 15 pay lines to play on and a maximum bet of £/€/$75 per spin, while the RTP tops out at 95.79%. The maximum possible win is 2500x your stake, achieved by landing the top value diamond symbol, so it’s nice that the maximum possible win can be achieved in a single spin rather than making you jump through hoops! The next most valuable symbol is the string of pearls that pays 1000x, so there are decent wins possible all the way down the scale.

We said this game was stripped back and we really meant it! Jewel Box comes with just one bonus game, a pick and win feature, which gives you the chance to choose jewel boxes to find the cash prizes inside. Other than that there are no free spins or other bonuses beyond the multiplier wilds to fall back on, so you’ll have to rely on the main game to bring you most of your cash. There is a gamble feature, however, that allows you to bet your latest win on the colour of the next card, double or nothing. This feature really lets you make the most of the wins you pick up, so even smaller wins can be significant!

The Jewel Box slot game takes its theme seriously and it’s obvious a lot of effort has been put into its design and production. It’s very simple and stripped back in contrast to many of the more complicated slots out there, but if you’re looking for laid back action with some decent wins at the end, this is a great option for you.