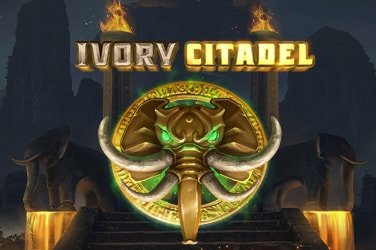 Ivory Citadel is an adventure-themed slot by Just For the Win and Microgaming, first released in 2019. The slot takes players deep into the heart of the Asian jungle, where they have spin reels adorned with stone statues and carvings in order to win cash prizes.

It’s an action-packed slot with suspenseful music – adding more suspense to each spin when you’re on the cusp of a big win – and one definitely worth trying.

As usual, it’s the game’s special features which really make Ivory Citadel worth playing. Mystery symbols can land on the reels at any point in the game, during both the base game and free spins. These symbols remain unrevealed until all other symbols on the reels have landed, and they can turn into any symbol in the game except the free spins symbol.

Players can also win free spins by landing three or more scatter symbols on the reels. 8, 10, or 12 free spins are awarded for 3, 4, or 5 scatters. During the free spins mode, mystery symbols turn into Sticky symbols once they’re revealed, and any reels which end up containing only Sticky symbols will become a wild reel – leading to some great opportunities for wins.

Ivory Citadel plays smoothly on mobile devices including iOS and Android smartphones and tablets. The slot loads quickly and doesn’t lag, and the game’s graphics look just as good on the small screen as they do on a larger one.

Ivory Citadel offers an average return to player of 96.03%, which is around average for a slot game of this type. This means that for every £100 that player spend spinning the reels, they can expect to win back around £96.03. This is neither high nor low, but it does mean players shouldn’t be put off Ivory Citadels by the RTP. It’s also a medium variance slot which means it’s well balanced for most players in terms of how frequently wins come in.

Ivory Citadels doesn’t break any new ground either in terms of its theme or its features, and yet it’s a very playable slot. In part, this is likely down to the game’s excellent graphics and suspenseful soundtrack, although sometimes most players want to get back to basics and just enjoy a slot which doesn’t get wrapped up in bonus levels and over the top features.