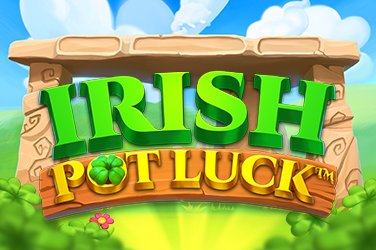 We’re off to the Emerald Isle for an adventure in the slot game Irish Pot Luck, with the big book of Irish stereotypes getting raided for yet another go at grabbing the leprechaun’s gold! It’s a familiar theme, but one that’s executed very well thanks to some top quality graphics and lilting Irish music, as well as some lucrative prizes on top!

Lovely visuals, a jolly Irish theme and a handful of fun mechanics, so what’s not to like? Let’s find out in our Irish Pot Luck slot game review.

Developers NetEnt have certainly gone all out on the visuals in this slot, crafting a little magical world on an Irish hillside dotted by standing stones covered in mystical carvings. The reels are made of carved rock themselves, with a lintel between, while the symbols are found on tiles in the playing area below: The low values represented by card suits, while the high-value symbols include Irish harps and leprechaun pipes and hats. To the left of the reels the little Leprechaun sits, fishing enormous coins out of a pot of gold, while to the right a signpost displays the multiplier. Irish PotLuck Slot dazzles with its visual presentation, showering the screen with shamrocks, celebrating wins with a couple of tankards of ale, and even the Leprechaun gets in on the fun by throwing coins on the screen to hand out bonuses. A lilting Irish tune and funny sound effects add to the fun, creating a lovely atmospheric theme.

While the bonus round in the Irish Pot Luck slot game is the main attraction, the main game isn’t without its charms, though it takes place on a fairly standard five-reel and three-row grid using 20 pay lines to play on. The wild coin is the highest paying symbol, which is worth 50x your stake for a line of five, which isn’t bad at all when you consider the £/€/$200 maximum bet you get to play with! The RTP is a hair over average at 96.06%, so there’s no need to be too worried about losing out, but you’ll have to do well in the bonuses to come away with a fortune.

There are a hatful of bonuses to enjoy in Irish Pot Luck, and you don’t even have to wait for the bonus round to play them! The Leprechaun helps out by chucking random wilds, scatters and jackpot symbols to the reels as you play. You’ll also see the random multiplier sign spin as the game plays, awarding a random number up to 5x. There are also free spins to be had, with 10 awarded for landing three rainbow scatters on the reels, while the multiplier sign can increase your multiplier up to 15x in this mode. The final bonus is the jackpot wheel, activated by landing three jackpot symbols, which can either reward prizes or take you down to the second wheel, then the third wheel by landing on arrows. These two wheels have progressively better prizes on them, while the central wheel awards a jackpot worth 5000x your stake.

You can’t fault the presentation in Irish Pot Luck, it looks great, while the colourful action and amusing antics of the friendly Leprechaun are all great fun to watch. The main game is rewarding and it’s hard to argue with the amazing bonuses, which are diverse and fun in equal measure.