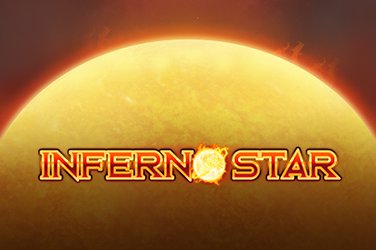 Sometimes as an avid slot player you just want a new game which looks good and packs a bunch of fun mechanics together, Inferno Star is one such game, with its sun-based theme, that takes a regular fruit machine and updates the graphics for the 21st century while adding a couple of fun extras that will really heat things up!

So is this game hot stuff, or will you just end up getting burned? Let’s take a look in our Inferno Star slot game review.

Developers Play N’ Go are no stranger to fruit machines, so you won’t be surprised to learn that everything looks pretty much how it should. One big difference is the background, which features an enormous image of the white hot surface of the sun as if seen from space, which gives Inferno Star a bit of gravitas. While the symbols themselves are pretty generic if you’ve played fruit machines before they’re at least well designed, and the various lemons, plums and cherries look great with well presented graphics in a cartoonish style. There is also a suitably grand theme for a game with such a cosmic outlook, which will make you feel like you’re in a disaster movie.

In terms of the actual mechanics behind Inferno Star, the game is pretty close to other slots in the genre, having three rows and five reels as well as five pay lines to play on. The best paying symbol in this game pays pretty well at 500x your wager, which can be up to £/€/$100 per spin, so the maximum prize in this game can be as high as 2500x your stake or £/€/$250,000. The second most lucrative symbol is the watermelon or cherries, which both pay 75x your stake, so don’t expect those big pays to continue down the scale, however the RTP is relatively high at 96.38% so you won’t be short changed.

Remember that the Inferno Star slot game is a simple fruit machine at heart, so you shouldn’t be surprised that there are not many special features to enjoy in this game. One feature that this game does have is the re-spins feature, which activates whenever a sun scatter lands on the third reel, and gives you free re-spins for as long as you keep landing more sun scatters on the reels. Each of these will flare up angrily, becoming Raging Sun symbols, while reels that have these symbols on remain fixed and the other reels spin around them. As a result, you stand the best chance of getting those five sun symbols you need to land the highest jackpot in the game.

Inferno Star slot game is an excellent fruit machine that combines just enough classic elements and just enough modern features to please just about everybody. It’s not the most rewarding in the main game, but it can be if you manage to land those awesome sun symbols, which can pay enormous cash prizes!