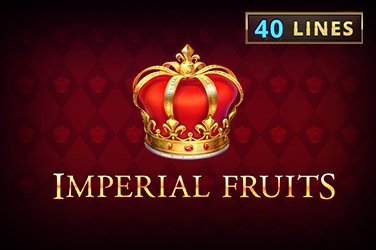 Game studio Playson has been on a bit of a fruit machine binge in recent years, turning out a large range of new fruity titles around a variety of themes, some classic and some modern, to cater to different tastes.

Imperial Fruits 40 Lines is towards the Bentley end of the range, keeping all of the familiar fruit icons you’ll know and love while giving them a fancy makeover so that it looks like the kind of slot the Queen would play, if she played slots. But are there top end prizes to go with the top end styling? Let’s take a look in our Imperial Fruits 40 Lines slot game review.

Probably the most distinctive thing about Imperial Fruits 40 Lines is the way it looks, ditching all the cartoonish and cheeky elements you might think of when you consider fruit machines in favour of unbridled luxury. The background is a velvet wallpaper pattern embossed with crowns, while the symbols themselves look like they’ve come from an oil painting or a still life hung in a palace. These symbols are all your favourite fruity icons, including everything from oranges and pears to cherries and watermelons, but with some higher paying wilds and scatters thrown in like crowns and different coloured stars.

One of the major intentions behind Playson’s rash of new fruit machines seems to be to bring back a traditional form of gaming for the modern era, keeping the older mechanics with some small updates while greatly overhauling the looks. The Imperial Fruits 40 Lines slot game fits nicely into this model, because there aren’t any radical changes in the layout to accompany the new looks. This slot boasts four rows and five reels with 40 pay lines to play on, though high rollers will be pleased with the £/€/$100 per spin betting limit, which is higher than you could expect in older games. The top potential prize is a cool 100x your wager, meaning there’s a maximum prize of £/€/$10,000, which isn’t massive but isn’t to be sniffed at either. It also explains why the RTP is up at 96.46%, nicely above average.

One of the other consequences of this retro approach is that Imperial Fruits 40 Lines is a bit lacking in the bonuses department, and doesn’t come with any special bonus rounds at all, like pick and win or free spin games. Having said that, the main game does boast a couple of special symbols: The wild and the scatter, which can help add to your prize bank. The wild is the imperial crown, which is an expanding symbol that can take over whole reels when it lands while also filling out the usual substation duties of a wild. The scatter comes in two forms, the diamond and the gold star, which pay out regardless of whether they land in a line and are worth different amounts, with the star being the highest paying symbol in the game.

Imperial Fruits 40 Lines is a surprisingly sumptuous take on the traditional fruit machine, and though it doesn’t stray far from the path in terms of the mechanics, it’s still a lot of fun to play. There might be no specific bonus rounds, but that just means the top wins are only a spin away in the main game, and with 10k up for grabs that’s no bad thing!