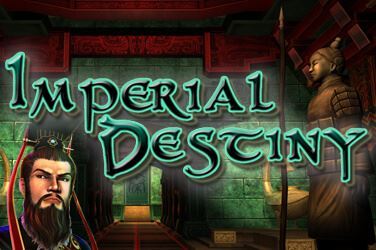 Developed by Eyecon Gaming, the Imperial Destiny Slot Game is an entertaining video slot that transports you back to China in 220 BC, to the time of first emperor Shi Huangdi. It offers an action-packed gameplay experience with plenty of potential for decent wins.

The design is well put together, and it’s fully optimised so that you can play on your preferred device.

With a Return to Player (RTP) of 95.30%, the Imperial Destiny Slot Game is considered a medium volatility slot, offering a balanced opportunity for decent wins across the 25 paylines.

The oriental theming of the Imperial Destiny Slot Game presents the reels on large red banners set against a traditional temple backdrop. It’s a pretty dark and gloomy aesthetic, though this helps create atmosphere alongside the accompanying soundtrack.

The theming continues with the symbols within the Imperial Destiny Slot Game, including coins, parchment, shields and armour, bracelets, golden orbs, and earrings. The latter is the most rewarding, especially if you manage to land five in view.

The wild is represented by Shi Huangdi himself, who can only appear on the second and fourth reels. Whenever he forms part of a winning combination, the payout will be doubled.

The Imperial Destiny Slot Game’s minimum bet is set at a reasonable $/€/£00.25, which should suit those who are new to the world of online slots. The maximum bet is set at just $/€/£12.50 per spin, so seasoned players and high rollers are unlikely to play for any extended length of time.

Watch out for the warrior statue, which acts as one of the Imperial Destiny Slot Game scatters. Landing three or more will result in activating the prize pick feature, where you’ll be able to select from the available statutes to reveal warriors with multiplier prizes. There’s the chance to win up to 100 times your total bet value, with the number of picks you can make determined by the number of statues that activated the bonus feature.

To get free spins, you’ll need to find at least three bell symbols in any location on the reels. Three bells will result in 15 free spins, four will get you 20 free spins, and five will leave you spinning for free 25 times. During this round, the Shi Huangdi wild symbol can appear on reels one, three, and five instead of the usual second and fourth reels. Whenever the wild lands, it’ll expand to create a wild reel. There’s the chance to enjoy up to a fantastic 400 free spins by re-triggering the feature.

The Imperial Destiny Slot Game is an entertaining slot with a great design and action-packed gameplay experience. There are plenty of opportunities for incredible wins, and the free spins bonus with the chance to retrigger is outstanding, especially if you can hit the max of 400 free spins.