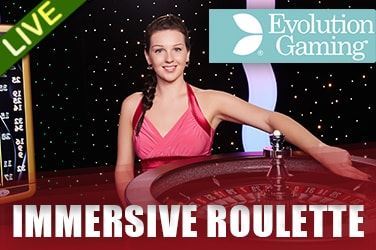 With a title such as “Immersive Roulette” expectations are immediately high and this game certainly delivers with a gripping ambience that makes it a highly popular live dealer version of everyone’s favourite casino game.

The rules of Immersive Roulette are exactly the same as your traditional European roulette, where players simply need to correctly predict the numbered slot a white ball falls in at the end of each spin. You can do this by placing straight-up bets on individual numbers at odds of 35/1 or give yourself greater coverage of the playing board by placing bets on multiple numbers, sections of the wheel, as well as other side bets that cover large portions of the table. An example of such a bet would be an even-money bet on whether the winning number is a “red” or “black” number, which will cover just under half of the board.

The visuals of Immersive Roulette are what sets it apart from other similar games on the market. The setting is a very minimalist, dark backdrop that means that all eyes are on the live dealer and the playing wheel. To put it bluntly, there are no distractions. The pace of the game also adds an extra layer of immersion, with the rapid tempo between spins meaning you’re relying on quick, effective decision making, and the general speed of the game also helps to add an extra dimension of excitement and gives you a greater sense of being in a live bricks and mortar casino where there is less time between spins than on a traditional video roulette game.

That said, in order for Immersive Roulette to be the success that it is, the format of the game needs to be built on solid foundations that make it easy for players to understand so they’re not immediately alienated. Fortunately, Immersive Roulette benefits from clear signposting, while its slick responsiveness makes it easy to place bets quickly and efficiently.

If you’re new to Immersive Roulette, we would initially recommend sitting out a handful of spins while you get used to the timings between spins, along with the intervals between placing your bets and the “No more bets” call from the live dealer. You do have a timer at the bottom of your screen but it is easy to lose sight of that when you’re in the thick of the game, so give yourself a bit of time to get used to having slightly less time to make your plays before getting stuck in.

Immersive Roulette does what it says on the tin and is a gripping, tension-packed game that has that little extra bit of spice when compared to other live roulette games on the market. The tone is slightly more serious, which should appease the more high-brow players, while the visuals and gameplay mean that players of all sizes will be coming back for more.