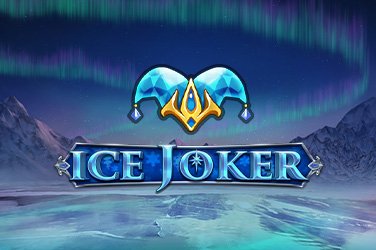 We’re heading for the land of ice and snow in this next game, which takes a familiar fruity theme and plays it out in a less familiar location. There’s not usually much fruit in the Arctic, but we think that this must have something to do with the Ice Joker in the title, who has been making mischief and moved it all into the snow.

So can you profit from the Joker’s little game, or are your chances of winning frozen solid? Let’s take a look in our Ice Joker review!

We weren’t really sure what to expect from a fruit machine set in the snow, but we can’t fault the execution of the idea which looks amazing. With a frozen wasteland for a background and reels completely encased in ice and massive, dangerous-looking icicles, they’ve taken full advantage of this setting’s potential and you’ll feel freezing cold just looking at it. The aurora glistens overhead and chilled out background music fills the air. It’s very relaxing! Even the fruit doesn’t escape, and each lemon, cherry and plum is frosted and glazed in a thin layer of ice. Fruits represent the low-value symbols, while the high-value symbols are taken up by BAR and lucky 7s, but the whole thing looks extremely well designed and high quality, with excellently rendered backgrounds and symbols.

The visuals are a lovely surprise in this slot, but this is still a fruit machine at heart, so the simplicity of that sort of game still carries over. There are five reels, three rows and 20 pay lines to play on while lining up three or more of any set of symbols will grant you a win. These won’t be the biggest wins, with the highest paying symbol granting 50x your stake for five in a row, but the frequency of those wins at a maximum bet of £/€/$100 a spin is sure to be enough for all but the highest of high rollers with an RTP of 96.23%. There are actually two scatters in this game, one of which also doubles as a wild, which will help unlock the bonus features it offers.

The Ice Joker herself is the most powerful symbol in the game, acting as both a scatter and a wild and laughing as she does so, helping to finish off other combinations but crucially also activating three free spins whenever it lands on the reels. A second scatter also exists, the snowflake, which is designed to activate the winter bonus when you land three. Spinning the wheel decides how many bonus Ice Jokers you are given from one to seven. Then you are awarded free spins until no Jokers land on the reels, at which point one of the Jokers you won is used instead to continue the game. This goes on until you have no jokers left.

We thought there was no way you could dress up a fruit machine to look any different than the many hundreds of others on the market, but thanks to some excellent design work and some fun and nifty little mechanics this really is something different. The Ice Joker slot game is worth a try for anyone who likes a little something new, but with the tried and tested fun of a good old fruity to back it up!