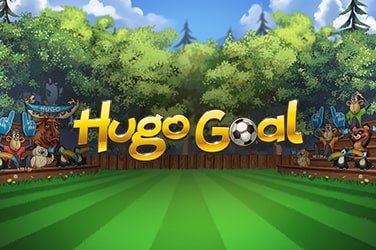 It’s time for another adventure with Hugo the Danish troll! This little guy might not be especially well known outside Scandinavia, but he gets up to all kinds of adventures with his little animal friends, and this time he’s having fun with the beautiful game!

Hugo Goal is packed full of cutesy forest animals wearing football gear, as well as the evil witch as a referee, but alongside all the syrupy sweetness there are some secret little bonuses and cash prizes that make it worth your while! Let’s take a look in our Hugo Goal slot game review.

You certainly can’t fault Hugo Goal for its enthusiasm, and this game really ups the ante in terms of how loud and exciting it is. The background of the slot is a little woodland football stadium with benches full of celebrating animals of all kinds, brandishing scarves and novelty foam hands. There’s a bouncy club soundtrack in the background and nothing ever stays still for long, while the symbols themselves are football gear like boots, gloves, balls and flags. The higher value symbols are also there, represented by stacked representations of Hugo and the evil witch referee. Exploding fireworks, fountains of coins and loud whistles blast across the screen at all times, adding to the excitement.

The Hugo Goal slot game is actually a little different to the other games in the series, and for a start there are just three reels and three rows to play on like an old fashioned fruit machine, though there are more pay lines at five. The betting limit is also nice and high at £/€/$100 per spin, and though the symbols aren’t the highest paying you’ll find, the fact you only need three in a row to get the highest payments means it’s easier than in other games. The RTP is 96.49%, so you can be confident that there’s some money to be made, but if you need reassurance there are also some nice bonus games to top you up!

One of the bonuses on offer is the character re-spins, which activates when you have two reels covered by stacked characters. In this case the third reel will re-spin as many times as it takes to land a third character or wild, which can win you plenty of combinations before you ultimately hit the big one! This even happens with stacks of low value symbols, though you only get one free re-spin rather than several. There’s even a penalty shoot out to enjoy, activated by landing a full screen of one symbol, in which you simply have to guess the direction the kick will go. Each time you save a kick you get a higher multiplier, up to 10x your win, which will be applied to the win that activated the feature straight after you finish.

Hugo Goal slot is a fun little game that doesn’t take itself seriously, offering some excellent visuals and exciting themes to bring it to life. While the main game doesn’t pay all that well the wins come thick and fast, and the bonus games are both fun and profitable, making this one a game you must try!