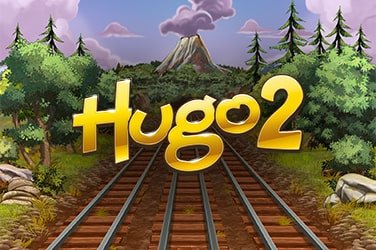 Fans of cartoons will be happy to learn that this slot is based on the famous Danish cartoon character Hugo, a loveable little troll who has adventures with his animal friends, dubbed into English and made popular on Saturday morning TV.

Hugo has had a few different kinds of adventures in video game form, and even slot form, so Hugo 2 has a famous face behind it, but is it fun to play and does it pay well? Let’s find out in our Hugo 2 slot game review.

The Hugo 2 slot game sees our supernatural little friend working in a mine, much like his first adventure in the original, and the activity takes up the majority of the symbols on the screen. All of the symbols in this game are unique and include mine carts full of ore, train whistles, Hugo’s train driver hat, track switches and a skeleton key. Higher value symbols include gold coins, stacks of gold bricks, diamonds and the faces of Hugo and his female nemesis. The graphics are extremely cartoonish, but that doesn’t mean they look bad, because excellent 3D graphics are employed to make the whole game come alive with animations in both the symbols and the scenery. Steam pours out of the whistles, characters dance and move when they’re part of winning combos, and there’s even an exciting chase scene in the bonuses.

While the theme of this game might be pretty zany, don’t expect anything especially wacky in the mechanics, because it’s all pretty straightforward and a joy to play! There are five reels and three rows, with ten pay lines to play on, where you can bet a maximum of £/€/$100. There are also three separate special symbols including two scatters, which come into play in the bonuses, though it’s worth remembering that the maximum potential win is 5000x your stake! This is reflected in an RTP of 96.53%, which is nice and high, though the high volatility means that you might have to wait a bit before striking it big!

Thankfully though there are some top class bonus rounds to help you on your way. The first of these is a rather hair raising pick and win game activated by landing three witch scatters, located inside a suitably spooky cave, where some choices will win you money and some will kill you dead. Whether it’s being dragged to your doom by bats or crushed by falling rocks, it’s a dangerous old world! The other bonus game is activated by landing three of the beaver scatters, which sets you off on a madcap 3D mine race towards the mountain, with 10 free spins possible. It’s your job to avoid the many hazards you’ll encounter such as roadblocks, though you have three lives to play with, as well as grab bonuses including more free spins and coins that confer multipliers.

Hugo 2 slot game is a fun, cheeky, cartoonish little game that nonetheless hides some excellent prizes and bonuses that will make your day very bright indeed. While the main game doesn’t have as many features as you might like, the theme is so good, and the prizes so rewarding, you’ll definitely want to give it a chance!