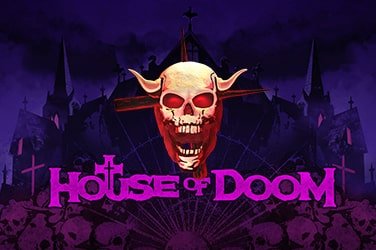 Play N Go have created a slot especially for Metalheads! House of Doom grabs just about every heavy metal trope you can imagine and runs with them, inviting you into a haunted house filled with pentagrams, ram skulls, and just about all the satanic imagery you can think of. Plus, it’s all accompanied by an intense and frenetic heavy metal soundtrack in the style of Iron Maiden.

This isn’t the fuzzy birds and candy slots you might be used to, so be warned, but fans of the genre will be in… Hell, I guess? Let’s take a look in our House of Doom slot review.

It’s got five reels and three rows, and wins are achieved by matching between three and five symbols. House of Doom Wilds generate wins and replace other symbols to complete combinations, while House of Doom scatters activate the bonus rounds. The betting limits are generous, coming in between £/€/$0.10 and £/€/$100, adding up to an RTP of 96.1% – about average. So far, so normal. In reality, this game is all about the theme.

And what a theme it is. This game is certainly not for the faint of heart, but if you’re a metal fan or just after something different then you’ll almost certainly get a kick out of it, with its furious musical licks and distinctive graphical style. Set against the background of a demon-infested haunted house, it’s up to you to match combinations of flaming roses, ram skulls, pentagrams, ghostly psychics and crosses wreathed in barbed wire. While the low-value symbols are just the 9 – A icons, even these have been lovingly rendered in gothic script. Perhaps even more impressive than the imagery is the music, which alternates between a series of powerful heavy metal guitar riffs as the reels spin and combos are formed, which seem to actually fit together in a frenetic metal symphony rather than a series of discordant noises as seems to be the case in other slots.

There are two main bonus rounds in this game, both suitably dark of course, Skull Abyss and Doom Spins. Landing three skull scatters brings up a typical pick and win grid, allowing you to continuously turn over skulls to reveal cash prizes or even activate the main bonus round until you find the collect option. The Doom Spins bonus is activated by landing three scatters, awarding 10 free spins during which all scatters are transformed into wilds. Reels are also highlighted at random, and any wilds landing in these reels will be expanded to take over the reel, generating even more wins. This feature can be re-triggered multiple times and bagging more scatters can add free spins.

It’s hard to be unimpressed by the intense, stylish theme that House of Doom Slot Game boasts. Metal fans will be in their element, but the slick animations and bombastic images on display are easy to like and make for a unique experience that’s worth a play for any slots aficionado.