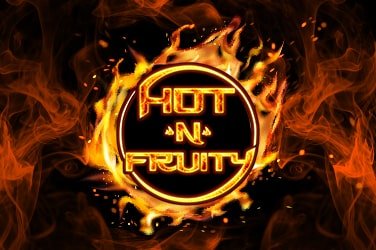 We’re turning up this heat in this next slot, which combines the traditional look of a fruit machine with the fiery modern fun of the very latest online slot games.

It’s that combination of old and new that makes Hot N’ Fruity so fun, mixing classic elements with new ones, but is the prize money as enticing as the format? Let’s find out in our Hot N’ Fruity slot game review.

This Hot N’ Fruity slot looks about as traditional as it can, featuring all of the most famous symbols from classic fruit machines, including not just lemons and cherries but watermelons, grapes, bells and lucky sevens. The background is a little less traditional, with flaming tongues of fire licking up against the reels, which is not the only animation you’ll find in this game, though there is also a bit of background music to help things along. The fruit looks excellent, rendered exceptionally well in amazing 3D graphics, which means that the game looks great, especially as the symbols grow and jump when included in combos and the different game modes are activated by sheets of fire that splash across the screen.

While Hot N’ Fruity may look just like a traditional fruit machine, there are a few extra features that mark it out as a more modern slot than you might expect. There are three rows and five reels to play with on 20 pay lines and a maximum bet of £/€/$100 at the top end, and while the top prize is 200x your bet, there are a few more extra bonuses that can help you add to your winnings. That explains the bang average RTP of 96%, though you can better this considerably if you play your cards right in the bonuses.

The first major feature to talk about in this game is the two wilds, the green re-spin wild and the gold wild. The green re-spins wild triggers on the middle three reels and can take over one of them, giving you a bonus of up to three re-spins if you manage to land more of the wilds on the other reels. The second type of wild just acts like a normal one, substituting for other symbols and helping you to complete combos, potentially adding greatly to your maximum wins. There’s even a brief appearance from the flames themselves in this game, with each win potentially triggering an explosion that enables a cascading reels mechanic, swapping the symbols round and landing you yet more wins. Unlike the main game in Hot n Fruity, the bonus game greatly boosts your potential win to as much as 1000x your stake, or £/€/$100,000, which is no small amount in anyone’s book!

Hot N’ Fruity unquestionably looks like a retro slot game, and if it weren’t for the top quality graphics and the occasional flash of animation you could easily think it was 20 years older, but that all changes when you start to play and you are impressed by all the modern mechanics The random wilds and exciting re-spins feature are both great little features, and the top prize will certainly tempt even the most sceptical gamer for a spin!