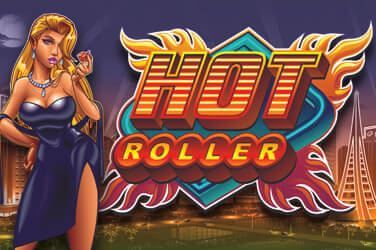 For many people, it was Vegas that started it all. The shining lights, the food, the entertainment, the endless possibilities, or simply the promise of huge wads of cash, Vegas is the glamorous heart of the slot gaming world.

Pay tribute to all that makes Sin City great in Hot Roller by developers NextGen and revel in the fast living, fast cars and fast women who make the town what it is. So will you find yourself on the strip or lose yourself in the desert? Let’s take a look in our Hot Roller review.

The Hot Roller slot game is a lot like Vegas itself: bold, brash and exciting, but subtle it is not. Don’t expect any complicated mini-games or clever little story arcs in this game, it’s all about booze, gaming and the casino lifestyle. The lower symbols are shimmering 9 – A icons, while the more valuable symbols are represented by a cocktail, a pair of flaming dice, a roulette wheel, a croupier, a stack of chips and a buxom blonde gambler. The game’s backdrop is also appropriately Vegas, depicting the skyline as the sun goes down and the neon lights come up when anything can happen! The graphics and animations are fine, though not up to the standard of the most modern slot games, if you’re only there to spin the reels and make some money it’s unlikely to matter to you.

Appropriately enough, the big prizes are largely to be won in the main game rather than the bonus rounds. This ain’t no video game, it’s a casino, so winning is as simple as getting a lucky spin on the reels. The symbols are therefore worth quite a bit on their own, with the croupier paying out 1,000 for a combo of five on the reels, and with a betting range between £/€/$0.1 and £/€/$0.50, you’re quickly talking about a whole heap of cash. That’s borne out by the middling RTP of 95.1%, meaning you’ll need to strike it big to reap the rewards. Alongside the rest of the symbols, a pair of flaming dice act as the scatter and the blonde gambler acts as the wild, and she can finish off combos for you that are automatically doubled in value by her presence.

You can play with up to 36 free spins on a 6x multiplier this way, and you can even reactivate this round and play with the same numbers again if you land another three scatters in your spins. Finally, if you wish, you can gamble the lot. Pick a card, and if you guess the colour right it doubles your winnings while guessing the correct suit as well nets you four times as much.

Hot Roller seems to have the soul of Vegas in its heart, and while it may not have the flashiest animations or the most up to date visuals, it has ample opportunity for you to gamble and win with the best. With prizes of £/€/$10,000 up for grabs and a maximum jackpot of £/€/$25,000, it’s all about what you dare to risk. As it should be.