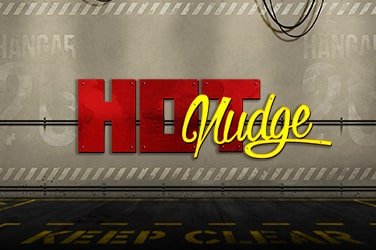 We weren’t sure what to expect from Hot Nudge except for possibly a featured nudge mechanic, but when we saw the developers were NoLimit City we had high hopes, because of their long track record of developing top quality slot games.

What we got was a fairly simple but great looking and fun game with a surprising theme, as well as some interesting mechanics that will have you playing again and again. So is this the nudge you need to give this game a try? Let’s find out in our Hot Nudge slot review.

Hot Nudge is heavily steampunk inspired in its visuals, though we should probably say Dieselpunk to be more accurate, because engines and mechanics are the order of the day rather than Victorian gentlemen and steam engines. You get the impression of raw power throughout this slot thanks to the thrumming and roaring of the engine that forms the background to the reels, complete with spinning wheels and turning cogs as it goes. The low value symbols are the card suits cleverly formed from engine parts so that you might not even recognise them, while the high value symbols are stylised versions of the face cards given new Dieselpunk personas: The gas mask wearing King of Diesel, the military style Queen of Steam, the fighter pilot Jack of Punk and the mechanic Hot Wild. Awesome animations liven up the whole game as you form wins, filling the screen with blue and orange flames as your prizes build!

The Hot Nudge slot game is fairly typical in other ways, giving you one more row than you might be used to with five reels and four rows, while there are 40 fixed pay lines to play with and a maximum bet of £/€/$100. As you might expect the major feature of the main game is the nudge feature, which comes into play whenever a part of a high paying symbol or wild falls on the reels, nudging the symbol downwards until it appears fully stacked and takes over the reel. Every nudge of this kind adds a 1x multiplier to your next spin, and if you manage to land more than one nudging symbol you can get your multipliers as high as 10x. The RTP is higher than average 96.21%, and it gets better, because there are even some bonuses to add to your cash pot!

The extra bonus in Hot Nudge slot is actually just seven free spins, which is a nice extra on top of the existing nudge feature, and includes a little nudge game of its own: The scatter symbols in this mode become walking wilds, so that when they land on the screen they nudge down a row once per spin, giving you extra free spins for as long as they’re on screen. You can keep going for as long as you’re able, and potentially grab dozens of free spins.

Hot Nudge slot game sounds a bit like it should be a one hit wonder game built around a single mechanic, but it’s so much more! NoLimit City have pulled it out of the bag again with the theme, designing a great looking and super cool Dieselpunk theme that can’t fail to impress. They also make good use of features that deliver great prizes and great fun too.