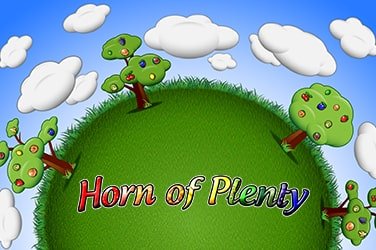 Horn of Plenty is a fairly standard looking fruit machine game with one big difference, which can really set the cat among the pigeons! It includes Spin16, is a fun mechanic that lets you add a bit of danger to an already risky business.

The feature is one that’s used in a lot of Genii slots other games and is popular as it adds the chance of applying big multipliers to your wins. But is this enough to help this fruit machine stand out from the crowd, or is it more of what you’ve seen before? Let’s take a look in our Horn of Plenty slot game review.

The Horn of Plenty, also known as the Cornucopia, is one of the oldest symbols in Greek myth, said to be the horn of the goat that fed the baby Zeus when he was hidden in a cave. It is supposed to be able to produce endless quantities of succulent fruit and vegetables, which is exactly what you get in this slot! With lovely blue skies and lush vegetation in the background, the symbols are all your favourite fruit machine images including oranges, bunches of grapes, bananas and kiwis. The Horn of Plenty itself also makes an appearance, and all in all the graphics are good if a bit simple, though there’s not much on display to mark it out from other fruit machines.

That’s where the mechanics come in! The game plays more or less like any other fruit machine with five reels and three rows, though with as many as 50 pay lines to play with if you like, and a slightly lower than average betting limit of £/€/$65. Before each spin you are able to choose a direction to be your ‘lucky’ pay line, and if you get it right by choosing the direction in which the pay line faces you are given a 3x multiplier for your win, while if you choose the exact pay line that ends up winning you get an amazing 10x multiplier instead.

Aside from a diverting little mini game you also get a range of excellent prizes to play for, especially the Horn of Plenty Wild, which pays out an excellent 4000x your stake for five on a line. In fact, the top three symbols all pay more than 500x your stake and you even get a special melon symbol that pays multiples of your existing wins when it lands at the same time, up to 150x per spin! You’ll have to land these as much as possible, though, because the RTP is a bit below average at 94.9%

You probably won’t be surprised to learn that the Horn of Plenty bonuses are a bit more limited in a game that’s already so generous, but there is still a free spins game that you can play. It doesn’t have any extra features beyond these, but you do get a 4x bonus from every win you make in the bonuses, so there’s plenty of cash to be won.

Horn of Plenty slot game has lots of tricks up its sleeve and it doesn’t take long to work out that this isn’t a bog standard fruit machine no matter how it looks. Generous prizes in the main game, a fun little side game and some high paying bonuses make this a real winner for those who like their games simple and their prizes big!