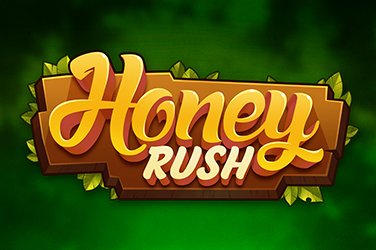 It’s not often you see something different in the world of slots, which is why we were so keen to review Honey Rush when we saw it, a game that is certainly unique!

Themed around a beehive, not only does Honey Rush boast hexagonal symbols it also brings together a few well known mechanics in a totally different way to create a fun and engaging slot that will have you hooked in no time! But will the taste be bitter or sweet for players? Let’s find out in our Honey Rush slot game review.

The Honey Rush slot game invites you into the wonderful world of bees, those little worker insects who fly about all day making wonderful golden honey. The reels are set up to look a bit like a hive, with a vaguely hexagonal layout composed of lots of little hexagons where the symbols live. The low value symbols are composed of flowers of various kinds, while the high value symbols are little bronze, silver and gold medals with bee related patterns on them. The background is a sunny, relaxing wood while the sound effects and animations are bright and cheerful, so you’ll feel quite at home to get into the mind of a bee and to set out in search of some gold!

This is a cascading reels game at its heart, so you’ll win by forming little clusters of symbols in any direction that begin to pay out when you land five of any kind, and can include more than 35 symbols of the same kind at the top end. Winning symbols are then removed and replaced by new ones that fall in from the top, allowing you to create chains of wins. The rewards for individual wins aren’t massive, with 200x your stake possible when you land a full screen of diamonds, but it’s all about stringing those wins together to create big combos. Even so, that’s not a bad number when you consider the betting limit of £/€/$100 your stake! It all adds up to a higher than average RTP of 96.5%, so plenty of incentive to get spinning!

The features in Honey Rush Bonuses are all contained within the main game, and they’re activated by landing those combinations of wins. There are four levels to complete, each achieved by landing a certain number of symbols, which then transforms at least seven symbols on the grid into the same more valuable symbol to guarantee you a win, whilst also adding sticky wilds to the screen. These will pay out the multiplier written on them up to 3x when part of a combo, supercharging your wins. At the top end, the fourth level that is achieved by landing 180 symbols as part of a combo, the entire screen will become one symbol to create the maximum possible win.

Honey Rush slot looks and plays differently to other slots you may be used to, which we think makes this game worth a try on its own, but the enticing prospect of building those really big combos is hard to ignore! Combined with some great bonuses for those who do well, we think you’ll love the life of a bee!