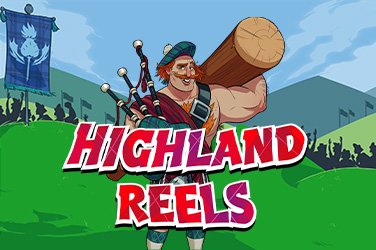 With a number of Highland Reels bonuses available, as well as a simplistic gameplay experience, our Casino77 team have completed a Highland Reels review for those interested in giving this Eyecon slot game a go!

Highland Reels slot game from Eyecon incorporates a Scottish theme, which is a little unique in the world of online slot games, therefore providing Casino77 players with something rather different immediately.

Those that do decide to give this online slot game a spin will be treated to some cartoon graphics that will feature a couple of individuals dressed in kilts to the side of the playing grid as they appear to be competing in some of the Highland Games that traditionally take place.

When exploring the paytable for this Highland Reels slot review, the Casino77 team were impressed with the array of symbols that are on offer to try and collect.

In total, there are 17 different icons that can be found, with many appearing in various forms. For instance, there are six playing card icons, as well as five different coloured kilts, two picture icons, two scatter icons and a wild.

The two scatters are represented in the form of a hammer and a Scotsman that can pay rewards when just two appear anywhere on the reels, whilst also triggering some of the great Highland Reels bonuses that are available in this Eyecon game.

The wild is depicted by the Cup icon and can substitute for all of the regular icons found on the paytable except for the scatters.

As mentioned, the Highland Reels review team managed to find that there are a couple of scatter icons that will trigger a number of different Highland Reels bonuses.

The first is via the hammer icon, with the Hammer Throw game being triggerable when three, four or five of these icons appear on the playing grid in one spin. Players will need to select targets in the hope of matching a pair in order to receive a multiplier of between 2x and 100x.

The ‘Caber Toss’ bonus can be triggered when three or more of the Scotsman icons appear, with players being awarded a pick for each of the Scotsman on the grid. The Scotsman will toss a caber which will then provide a prize of up to 100x the stake or 10 free spins, which can only be won once in this feature but all prizes will be doubled.

Whilst looking at the Highland Reels bonuses and doing this Highland Reels review, the Casino77 team took a look at the return to player (RTP) rate and the volatility level that has been provided by Eyecon. Indeed, with a rate of 95.05% and a medium level of variance applied, players will enjoy their time spinning the reels on this game.

As mentioned, Eyecon have gone down a rather different route with this game however that did not stop our team from enjoying their Highland Reels review for our Casino77 players. Indeed, the Highland Reels bonuses certainly made for an enjoyable experience, whilst the visuals applied also made the overall time spent playing this game as entertaining as possible.