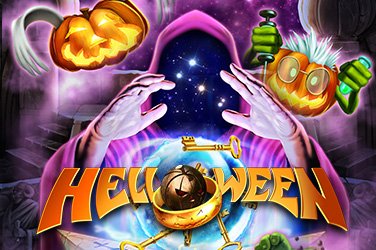 We love a good band tie-in when it comes to slot games, so we couldn’t wait to try out Helloween, based on the 1980s German heavy metal band which players of a certain vintage may remember.

But don’t worry, it’s not a requirement to know who they are to enjoy this slot because the band themselves don’t actually show up very much, though metal fans, in general, will love their music on the soundtrack. This slot is as wild and cinematic as they come, but will it make you rich? Let’s find out in our Helloween review.

Even by the standards of slightly mad heavy metal tie-ins, this slot is a bit off the chain, and some of the symbols and references will only make sense to fans of the band. Behind the reels in normal play sits a fairytale landscape that could be from a medieval slot, with mountains and lakes in the background that you can see from your stone tower. On the reels themselves, there are the generic 9 – A symbols with a gothic makeover, while the high-value symbols include a pumpkin ring, some ghoulish monsters, some creepy hands holding a key and a creepy hand over a crystal ball. The real standout of this slot is the animations, which are up there with anything you’ll see in a video game as objects levitate and catch fire or fly about the screen, with fantastic sound effects to go along with the Helloween derived soundtrack.

The big news in this slot is its collection of seven wilds, which are where players can expect to make the big bucks because elsewhere this slot sticks pretty solidly to the standard slot model. Three rows, five reels and 10 pay lines to play on, while a high but not massive betting limit of £/€/$100 keeps things ticking along. The RTP is a solid 96.2%, though much of that will come from the bonus round because the highest paying symbol in the main game only gives you 20x your stake.

Despite the bombastic metal soundtrack and the out of this world visuals you could be forgiven for thinking this slot is pretty conventional, that is until you hit the bonuses. Landing three scatters composed of seven floating keys, based on the title of one of the band’s albums, you’ll unlock one of seven free spins games all based on a different wild. Each of these is named for the band’s hits: I’m Alive gives you expanding pumpkin wilds which take over whole reels in all directions, Future Wild gives you a whole new reel background of a futuristic city and a wild that fills a reel, Eagle Fly Free has wilds that move around the reels between spins, Dr Stein turns all instances of a low-value symbol wild, March of Time gives you a walking wild, I Want Out gives you wilds that land on the screen and expand to 2×2 symbols, and Helloween free spins gives you seven spins as well as another go at one of the other features.

The Helloween slot game is certainly a rollercoaster ride visually, and it will just about knock your socks off if you’ve got the volume high and a big screen to play it on, but where this game really comes alive is in the bonuses. Far from coasting on the band name, this slot barely features Helloween apart from the music and actually delivers a really fun and rewarding slot game with plenty of surprises.