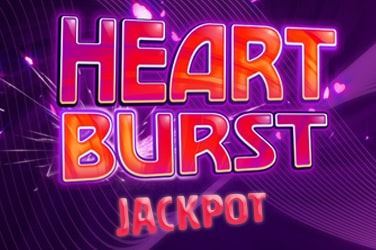 While some players love a slot that’s loaded with features and bonus rounds, other players prefer the stripped back experience that’s just you and the odds. Heartburst Jackpot is a game that tries to please both sides, offering a slightly more simplistic gaming experience than many modern slot players will be used to, but packing in a couple of extra features to help spice things up a little.

You can immediately tell the type of style that Eyecon were going for when they created this slot, just by looking at the symbols. All the classic fruit machine images are here, and the high paying symbols include everything from grapes, cherries and lemons to watermelon, BAR and bell symbols. The low paying symbols are slightly more pedestrian, being represented by the generic 9 – A, but there is more than a hint of the classic fruit machine at play here. The symbols themselves are well designed and 3D, with decent graphics to bring them to life, but the rest of the screen is a bit dull as it’s just a textured purple surface. Unlike older fruit machines, however, there are some flashy animations and sound effects to add some colour as the reels spin.

Also unlike older fruit machines, this game packs in five reels and four rows. That’s more than the usual three reels and one row you’d get in a classic fruity, demonstrating the designers’ ambition to bring the genre up to date. That all adds up to a chunky 100 paylines, which is more than even most modern slots. That’s not to say that the Heartburst Jackpot slot game throws tradition out of the window. Standard industry mechanics like wilds and scatters have been added, and this game even gets a free spins bonus round, but it’s not like they re-invented the wheel: Just brought it up to date a little. The wild is a red heart, which is able to substitute for other symbols, while the lucky 7 acts as a scatter and can even win you a 300 coin jackpot if you’re lucky enough to land five.

While the scatter is clearly lucrative on its own, the best feature about it is as the key to unlocking the bonus games. Landing three to five scatters will grant you between 15 and 25 free games, which can be a great way of making cash on its own, but this game also features a gamble feature that can make your winnings truly massive. The gamble feature is a simple card guessing game requiring you to choose red or black, doubling the winnings you took from the bonus game each time. This carries on up to five rounds, or when you hit a £$€32000 win, whichever comes first. Now that’s a jackpot!

Heartburst Jackpot is a great example of an old classic brought into the modern era with good design decisions and new mechanics. It manages to preserve all the charm and simplicity of the old-style fruit machines while adding some newer mechanics to spice it up, never losing touch with its roots. It’s not got the most advanced graphics or the flashiest bonuses, but it’s a great new game for fans of fruit machines.