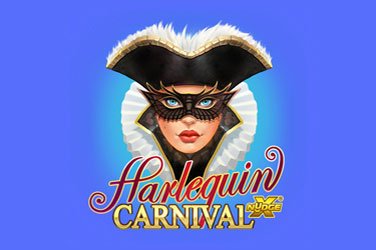 Are you ready to head back in time to one of the most elegant and sumptuous periods in history? And what if you can make a lot of money for your troubles? That’s the promise with Harlequin Carnival, a slot by veteran developers NoLimit City set in the dazzling palazzos and glittering streets of a Venetian carnival at the height of the Renaissance.

Amazing visuals are a given for this developer, but you’ll also benefit from amazing mechanics unique to this title and some huge jackpots to make it all worth your while. So will you be the life of the party, or does this game mask disappointment? Let’s take a look in our Harlequin Carnival review.

The Harlequin Carnival slot game leans heavily on the sights and sounds of the famous carnivals of Venice, known for their debauched masked balls and glittering fireworks. The visuals in this game are simply stunning, and from the glorious marble architecture and lush greenery of the background to the highly detailed symbols, it’s clear that a lot of effort has gone into this game.

The low-value symbols are aces of the different suits, but it’s hard to see them as low value when they’re intricately detailed in gold and gems, while the high-value symbols are represented by gorgeously colourful and highly detailed masked characters in traditional Venetian costume. The most valuable of these symbols, the sun mask, clocks in at 15x the players’ stake for a five of a kind combo. Given that the bets range from £/€/$0.20 to £/€/$100, this can be a huge amount of money for a simple combo in the base game. This all adds up to an RTP of 96.14%

While the bonus game is profitable enough, NoLimit City games are best known for the presence of their xNudge Wilds, a special kind of walking wild unique to their games. And Harlequin Carnival is no exception! The Harlequin wild really is the kingmaker in this game, expanding to take over a whole reel whenever it lands. The ‘nudge’ element of the game occurs when a harlequin wild lands partially on the reel, at which point it is ‘nudged’ downwards through the rows until it is fully present, attracting an extra multiplier for every time it is nudged. This can happen more than one on one spin, for truly huge multipliers.

The fun doesn’t stop there, though. When the xNudge Wild lands, you also get free spins equal to the number of reels to the symbol’s left, and it walks across the reels with every spin until it falls off the end. You can even land new Wilds beginning their journey on your respins, so the feature can go on and on. A second version of the wild also exists as a scatter, taking up just one space, triggering a second bonus round when you land three. Triggering this feature generates an xNudge Wild on the rightmost reel with a x3 multiplier, which walks along the reels as you take four free spins, adding an extra multiplier with each spin. This can generate huge amounts of cash, and thanks to your ability to re-trigger by landing three more scatters, you can keep going and going.

It’s hard to overstate how great this slot looks, and thanks to its lovely visuals and soundtrack of classical music, it’s a real joy to play. On top of this, it’s one of the few places you can play with xNudge Wilds, allowing you to make a huge amount of cash in the process with these unique features.

Join our carnival of slots and try other titles, including Extra Cash!, Valhalla, Irish Eyes and Deadworld.