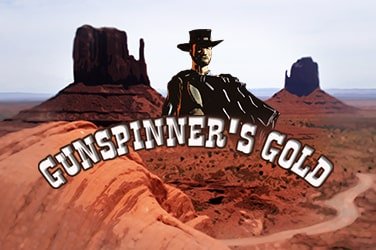 There’s nothing like stories of the Old West to bring out the romantic side of a slot player: Taking risks in search of reward was part of everyday life for those hard-living folks on the frontier; searching for gold, driving cattle and robbing banks.

That means they have a lot in common with slot players too, which is probably what makes games like Gunspinner’s Gold so popular. With great graphics, big prizes and some fun mechanics, can this 2020 release win the West? Let’s find out in our Gunspinner’s Gold slot game review.

Gunspinner’s Gold certainly looks the part, with a classic scene of the southwestern American desert to be found as the background of the reels. The reels themselves have the standard 9 – A disguised as playing cards to represent the low-value symbols, while the high-value symbols are represented by various icons of cowboy life: cacti, six-shooters, slugs of whisky, gold nuggets and wanted posters. Cute little animations on the symbols accompany wins, while a gritty western soundtrack plays in the background to really set the tone. It may look a bit old fashioned compared with the most modern games, but it’s plenty atmospheric enough as a result!

Old fashioned might sound bad, but in fact, it can be a good thing if you like your slots hard living and high paying! There might only be five reels and three rows in play, but with 30 pay lines and a maximum bet of £/€/$300 per spin, there’s plenty to like! On top of that, the Gunspinner’s Gold slot game offers some tasty payouts as well: the showgirl symbol is the highest paying at a whopping 6000x, while the second-highest paying bag of nuggets is still a high payer at 3000x, and the sheriff’s badge tops out at 1000x in third place! No wonder this game’s RTP is above average at 96.25%

One of our favourite parts of this game is that there are actually two ways to activate the free spins bonus: The first is by landing the free spins bonus symbol on the reels three times on one spin, which grants you twenty free spins. That’s nice enough, but on top of this bonus you also get a 4x multiplier on everything you win in the round, and you get stacked wilds on two of the reels. That’s quite a haul! On top of that, you can also activate the free spins by landing three or more scatters, and while this method requires you to land five in order to get the full 20 spins, it’s still a second method of hitting that rewarding bonus game!

Believe it or not, there’s gold in them hills, and you’ll find it in Gunspinner’s Gold! Thanks to some excellent bonuses that go alongside the top class wins in the main game, as well as the free spins with a 4x multiplier that can really supercharge your wins, there’s a huge amount to play for!