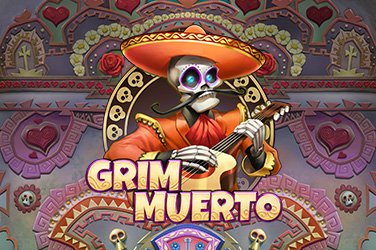 There are few festivals on earth that are as colourful and strange as Mexico’s Day of the Dead, and it’s probably that meeting of the grim and the joyful that makes it so interesting as a subject for slot games.

Grim Muerto has a stab at combining all of that gorgeous imagery and strange tradition with some fun game mechanics and some big prizes to make a game you’ll be dying to play. But does it have a life after death or is it dead on arrival? Let’s take a look at our Grim Muerto review.

One thing everybody knows about the Day of the Dead is how colourful and vibrant it is, and that’s something that Play N’ Go have managed to nail in this slot, which is about as busy and explosive as you can imagine a slot being. The background is a kaleidoscope of multi-coloured Mexican imagery, while the symbols themselves are a riot of light and texture. The low-value symbols are the generic 9 – A, though even these are richly decorated like a piñata, while the higher value symbols are the faces of the incredible skeletal Mariachi band that plays for us through the slot. Speaking of which the soundtrack is one of the best things about this game, bringing cheerful Latin vibes to every spin, while cute little animations help add a bit of life to the action (ironically).

The gameplay in the Grim Muerto slot game is deliberately simple to allow players to enjoy it as much as possible, so don’t expect anything weird or different about the game mechanics. You’ve got five reels and three rows to play with, while bets of £/€/$100 are possible across the 20 pay lines. While that’s all pretty straightforward there are also wild reels to contend with, activated by the appearance of a moustachioed face above one of the reels during play. This makes the whole reel turn gold, and if a guitar wild lands on the golden reel on that spin then the whole reel turns wild for the next spin, potentially earning a lot of cash. This feature can land on anything from two to five reels, so there really is a chance for big wins! No wonder the RTP is high at 96.51%!

Alongside this fabulous bonus, there is another chance to make some extra cash in Grim Muerto, the free spins round, which is activated by landing three of the Book of the Dead scatters on the reels. This grants you a random number of free spins as well as an extra wild, which is chosen at random from one of the main symbols, whilst you still get the benefit of the wild reels bonus in this mode too. On top of that, if you just missed out on the free spins and only landed two scatters, you can make use of the second chance bonus. This offers you four symbols to choose from, two of which are blank, but one of which has a cash bonus inside and one has a third scatter!

Grim Muerto is a fun and lively slot that doesn’t take itself too seriously, providing some fun gameplay mixed in with top quality prizes and some amusing bonus games. It’s not the highest paying slot, with a top prize of 1000x your stake, but for low rollers, it’s a great way to have a bit of fun whilst also adding some much-needed coinage to your bank account!