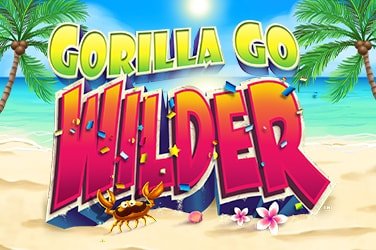 Gorilla Go Wilder is the sequel to the older slot Gorilla Go Wild, so as you might expect there have been a few upgrades since the original. Charting the adventures of Gary the Gorilla as he monkeys around the tropical world he lives in, this new game features a fun levelling up system that can dramatically improve your chances of winning.

On top of all this there are some fun bonuses to sniff out, but is this game top banana or will you want to banana split? Let’s take a look at our Gorilla Go Wilder slot game review.

Much like the first game Gorilla Go Wilder is a happy, sunny game full of bright colours and bouncy Caribbean tunes, which pushes the graphics you see in slot games to their limit. Gorgeous 3D backgrounds, fun animated symbols and the character of little Gary himself bouncing along to the left of the reels really help to set the scene, while the work that has gone in to create new themes for all the different islands is impressive and immersive. The low-value symbols are the generic 9 – A from the first game, but the higher value symbols include lemurs, toucans, chimps, coins and Gary himself.

The main attraction of this new and improved game is the interesting bonus round, which requires you to unlock new and different islands full of bonuses to improve your chances of winning, but there are also some fun mechanics to be found in the main part of the game. There are five reels and three rows to play on as well as 25 pay lines (to start with at least), while your maximum bet is slightly lower than usual at £/€/$75.

Gary the Gorilla is the wild and the most valuable symbol at 50x your stake, while the shell scatter can also be a valuable symbol due to randomly activated shell re-spins. In this feature, shells will land on the reels and stick there, with re-spins keeping coming as long as new shells land or your whole screen is filled with them. Like the sound of that feature? Well, there’s lots more where that came from when you head to the bonus islands! On a less welcome note, you’re going to need to head there, because the RTP is down at 92% in the base game, before the bonuses are active and bring it up to a reasonable level!

Land three or more bonus symbols and you’re off to the islands! The bonuses in the Gorilla Go Wilder slot game have a novel little levelling mechanic operated by triggering more bonuses, and at first, you’re offered just two of the seven islands. Land four bonus rounds and you’ll unlock the next, then 7, then 10, 15, 20, 25 and finally 30. Each of the islands has a different bonus and a different theme and background including; Crystal Cave, Light Jungle, Waterfall, Volcano, Dark Jungle, Purple Jungle and Beach. Bonuses include everything from walking wilds to 10x multipliers and 200 pay lines, and if you find an island you like the feel of you can always go back on your next bonus!

Gorilla Go Wilder is a perfect combination between good looks and good mechanics, bringing a fun little levelling mechanic to the table whilst remembering to pay well and include a hatful of bonuses in the mix on top. The bonuses are necessary due to the poor RTP in the main game, but you certainly won’t be complaining when you see how many features there are!