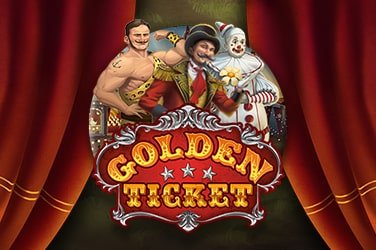 Head to the circus from the comfort of your own home with Golden Ticket, a fun-filled (af)fair from Play’n GO. A 5×5 reel grid, it’s simple to play with plenty of enjoyment to be had thanks to its top-of-the-game graphics and winning opportunities, reminiscent of arcade games with fun characters and big wins along the way.

You’ll love Golden Ticket if you love the circus and cashing in! High-quality graphics present strongmen, a ringmaster, weights, clowns and so much more. Be dazzled by its funfair sound effects and classic charm, with its 5×5 grid offering any slot aficionado entertainment in spades. It has an authentic arcade feel to it, which will keep you entertained, as well as numerous moving parts – such as cascading symbols – to provide an upbeat, engaging pace.

There are a number of opportunities to win. All you need to do is land three identical symbols vertically or horizontally to trigger the appearance of new symbols, including a wild. With 25 icons on the screen, you can keep spinning to start winning, all the while building to the chance to win a bonus shooting round, as we’ll go on to discuss.

Play’n GO, a Swedish-founded, Malta-based online gaming company, have been around since 1997, in that time have established themselves as one of the leaders in slot games. Known initially for blackjack, Play’n GO have expanded into slots, with a relatively small portfolio of around 20 slot games giving them room to ensure their graphics are second-to-none. Additionally, they pride themselves on their smartphone adaptability, enabling players to access their games on their tablets or mobiles wherever they go.

Offering an RTP of 96.73%, the stakes are better than average on Golden Ticket. Of course, this varies by platform, so be sure to check with your chosen site before embarking on your night at the funfair to get the most out of this popular reel grid game.

Golden Ticket has a very obvious bonus to aim for: the letters that make up the word ‘bonus’. If you reveal all these letters, you’ll activate a new screen involving the classic shooting stall at the fair, whereupon you have ten spins – in this case, ‘shots’ – at targets that include everything from ducks to more clowns. With a jackpot of 1,000 and up to 40 coins, you’ll have plenty of opportunities to take aim and fire to win, though note that the bonus can be quite difficult to trigger. However, with aesthetics as fun as these, we’d bet that you’ll be entertained for long enough to give it another go.

Play’n GO have done it again with this delightful soiree into the circus. If you love a well-performing 5×5 reel grid with a variety of icons and moving parts, then you’ve hit the jackpot with Golden Ticket – and you have numerous chances to literally do so!