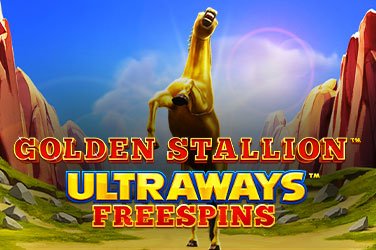 Brought to you by Microgaming and Northern Lights Gaming and released in 2021, the Golden Stallion Ultraways Free Spins Slot Game has five reels, three rows and 20 paylines, with the chance to boost the number of winning ways to an incredible 200,000 if you trigger the bonus game. The fully optimised design allows for complete compatibility across all devices, including laptops, desktop PCs, tablets and smartphones, though the portrait layout works best on the latter.

With a Return to Player (RTP) of 96.29%, the Golden Stallion Ultraways Free Spins Slot Game is considered a medium volatility game.

The Golden Stallion Ultraways Free Spins Slot Game boasts high-quality graphics with the reels sat within the canyon walls and horses galloping in the backdrop. The animations are smooth and the accompanying soundtrack further supports the western theming.

In terms of the game’s symbols, you’ll find the usual set of low-paying playing card royals – 10, J, Q, K and A – alongside four stallions. Each symbol has a golden version that pays six times more than usual. The Golden Stallion game logo is the most rewarding, paying 60 times your bet if you land a full house of five. There’s also a wild, a scatter and a horseshoe bonus symbol.

The Golden Stallion Ultraways Free Spins Slot Game’s minimum bet sits at $/€/£0.10 per spin, with the highest possible wager limited to $/€/£500.00. This vast range of available stake options leaves the game wide open to all players, from high to low rollers.

When you load the game, it’ll immediately notify you of how many spins it’ll take to get to the Golden Spin. It usually lies somewhere between ten and 20 spins. As the counter goes down, up to five galloping horses can appear, with the potential of stamping over the reel and highlighting specific positions. Once you’ve reduced the counter to zero, the Golden Spin will take place, with those highlighted positions now transforming into random mystery golden symbols, resulting in bigger winnings.

Three scatters will allow you to activate the free spins round, rewarding ten free spins. The horseshoe symbols will unveil how many ultraways have been triggered, which can be anything up to 196,608, significantly increasing your chance of landing a win.

The Golden Stallion Ultraways Free Spins Slot Game is a solid slot with fantastic theming and an excellent portrait design that works well on mobile devices. The Golden Spin feature is a welcomed addition, and the free spins round offers the chance to significantly boost your prize pot thanks to the massive increase in the number of winning ways.