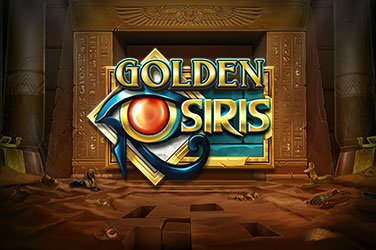 Powered by Play ‘n’ Go, the Golden Osiris Slot Game features seven reels and seven rows, and allows you to form winning combinations by landing clusters of five or more matching symbols. You can enjoy the same gameplay experience across all devices thanks to the fully optimised design, from laptops and desktop PCs to touchscreen tablets and smartphones.

With a Return to Player (RTP) of 96.27%, the Golden Osiris Slot Game is considered a medium volatility game. You can win a maximum of 12,000 times your stake.

The Golden Osiris Slot Game is themed around the ancient Egyptian lord, one of Egypt’s most important deities and god of the Underworld. The graphics are high-quality, with the backdrop of the game featuring the entrance to a grand palace, complete with hieroglyphs engraved into the columns. The backdrop supports the overall theme and contributes to the exciting yet mysterious atmosphere.

Symbols-wise, you’ll find four lower value gemstones alongside five more rewarding hieroglyphic symbols – there’s a bird, cat, jackal, ankh cross and scarab beetle. A cluster of five of the latter will result in a payout with one times your stake, while a cluster of fifteen will pay 50 times your total stake.

The Golden Osiris Slot Game’s minimum bet sits at $/€/£0.10 per spin, with the highest possible wager limited to $/€/£100.00. With a vast range of stake options on offer, both new and seasoned slot players or high and low rollers should enjoy this slot.

A quartet of hidden wilds are positioned in the shadows of the standard symbols, which become active when a symbol forms part of a winning cluster and disappears from the grid. The wilds can substitute for all symbols apart from the scatter, and also have a multiplier of up to ten times attached to them. Each cascade will see up to six new wilds added to the reels.

Every time you form a winning combination, the winning symbols will help to fill the Pyramid Charger. Once filled with 25 symbols, it will unlock to reveal a randomly chosen symbol. This symbol will then be highlighted on the reels, randomly converting an adjacent symbol into it, resulting in a payout. The first time you fill the Pyramid Charger you’ll enjoy a treble multiplier, but subsequent refills can result in a multiplier worth up to 30 times.

Trigger this by landing three scatters on the same spin, resulting in five free spins. The Pyramid Charger feature will be in play here, allowing for numerous symbol transformations, alongside the hidden wilds and up to 30 times multipliers.

The Golden Osiris Slot Game is an excellent Egyptian themed slot with plenty going on to keep you entertained from start to finish. The Pyramid Charger and its associated multipliers are the key to landing huge wins.