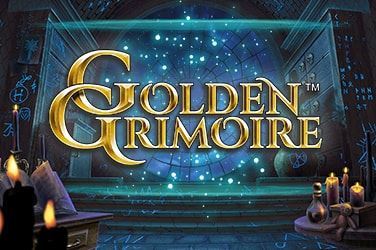 If you’re on the hunt for a different slot game, Golden Grimoire from NetEnt could be the magical game to capture your play interest. This five-reel, four-row slot has 20 fixed paylines and can transport you to a world of mystery and riches.

Golden Grimoire features mystery symbols, free spins and sticky symbols and can be played from just 20p a bet right up to $/€/£400 per spin.

NetEnt released Golden Grimoire in February 2019, and its game designers are so proud of their creative efforts they’ve actually pictured themselves in the symbols and pentagrams decorating the game’s backdrop. The slot is based on traditional, ancient magic and has a spellbook theme which carried over to all the symbols hitting reels.

This is a simple slot to play, and you just set your bet to the most comfortable level and then hit the Spin button to set the reels rolling. AutoPlay and Max Bet are featured on the control bar and act the same way as in most other games.

Low pay symbols in Golden Grimoire include the spades, clubs, hearts, and diamonds, while insects combined with gems pay a little more. The highest paying symbol is the spider holding brightly coloured gems, which pays out five times stake when all five hit the payline.

Mystery Symbols in base gameplay

Any time Mystery symbol changes match the symbol shown at the far left of the row all of the symbols in between are changed to match. Obviously, this makes it even easier to grab lines of five matching symbols during gameplay, so this slot is perfect for players who enjoy longer slots sessions. What’s more, when the Mystery changes into a Wild every symbol from the far left of that row also turns Wild!

Eight free spins are awarded when three Scatters hit reels one, three, and five on any spin. Although the Mystery symbol isn’t featured in free spins, a sticky Mystery shows up instead on all reels except one. These sticky Mysteries act just like the Mysteries in the base game but can also fire up the Sticky Mystery feature which means the symbol remains in place for the entire free spin bonus game. This is a real winner any time you manage to hook Sticky Wilds in free spin play!

Golden Grimoire has a low- to mid-variance level, and a max win of just 200x stake in the base game or free spins. This may mean jackpot slots players give it a miss, but it’s a great game for regular slots gamers who enjoy magical theme play. The slot has an RTP of 96.44%.