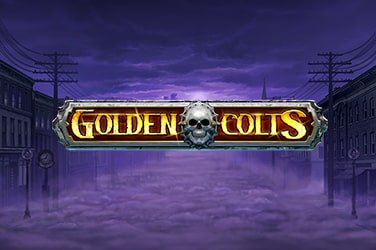 There’s always something spooky about Wild West ghost towns, but the town featured in Golden Colts surely takes the cake! Protected by a zombified sheriff wielding two golden six-shooters named Vengeance and Justice, there’s an outlaw gang in town hell-bent on robbing the bank and making off with its gold!

Golden Colts is a weird mix between gritty Wild West slot and spooky Halloween slot, but it’s got a unique vibe all of its own that we actually quite like. So will you clean up this town, or is it high noon for this game? Let’s take a look at our Golden Colts slot game review.

Golden Colts delivers perhaps one of the darkest Wild West slots we’ve ever seen because even when they’re gritty depictions of life on the frontier it’s at least hot and sunny! Not so in this game, which is set in permanent darkness with a creepy mist rising from the ground on the traditional Western main street. Aside from the grisly zombie Sheriff and the scary background this game plays the Western tropes pretty straight, featuring a collection of desperate-looking outlaws with guns and cowboy hats as the high-value symbols, while the standard 9 – A in Western-style letters make up the low-value symbols.

Gameplay-wise you’ll find that the Golden Colts slot game doesn’t stray too far from the path of most slots, offering four rows and five reels to play on with 40 fixed pay lines on which you can bet as much as £/€/$100. You’ll need to bet as high as you can if you want to make money in the main game because your maximum win is pretty low at just 12.5x your stake. That’s because this game is all about the bonus round for which it is best known, so that and the high RTP of 96.5% mean you shouldn’t worry about this game being stingy!

Golden Colts is a well-designed game with an interesting if strange theme, but we can’t complain when the graphics are so good and the attention to detail is so high! The main game isn’t the best-paying you’ll see, but luckily there are so many bonus games to play that there are plenty more chances to add to your prize fund!