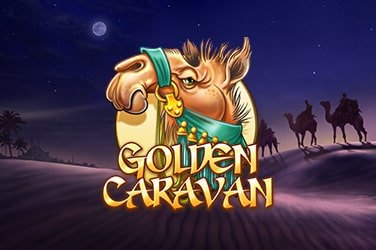 Mounting your camel and heading for the Silk Road was a ticket to wealth and prosperity for medieval merchants, but it wasn’t all plain sailing: Getting lost, attacked by bandits and being at the mercy of the elements were just a few potential hazards on the way to the Far East, but there was so much cash to be made buying and selling spices, silks and all manner of other delights.

Golden Caravan tries to simulate all that excitement and a bit of the danger, but does it take you back to the Arabian Nights or is it more of a nightmare? Let’s take a look at our Golden Caravan slot game review.

The Golden Caravan slot game really runs with its theme, turning every element of the game into something straight out of a storybook. The background is a romantic desert scene under the stars, with a caravan of camels striking out across the dunes and palm trees dotted out in the sand. The low-value symbols in this slot are the standard 9 – A, though they look great having been transformed with a stylised Arab makeover, while the high-value symbols are a combination of sights you might have seen on the silk road: Chinese, Arab and Italian merchants, an oasis, a camel laden with goods and a treasure chest stuffed with jewels. Cute little animations and a jangly Arabian theme also liven the game up.

Unlike the Silk Road that inspired it, navigating Golden Caravan isn’t very difficult at all because it uses a standard layout of five reels and three rows with ten pay lines to play on. The maximum bet is pretty high at £/€/$100 per spin, which is a nice amount when you consider the prizes on offer. The value of the prizes rises pretty steeply as you get towards the top end, so just like the real Silk Road this slot rewards risk-taking, because you’ll need to bet near the maximum to make serious money towards the lower end of the scale. By the same token, however, you could win as much as £/€/$25,000 if you land the highest value Arab trader, so it gives and takes! This variance is reflected in the above-average RTP of 96.19%, meaning you’ll have to bet well to beat the odds.

To help you on your way Golden Caravan also features a free spins game, triggered by landing three camel scatters on the reels. This grants you ten free spins with a 2x multiplier, which is great enough on its own, but landing three more camels can add another 1x to your multiplier and give you another 10 spins. This can keep going until you reach the maximum of a 10x multiplier, a truly amazing figure!

Golden Caravan is an atmospheric slot that really manages to capture the excitement and adventure of the Silk Road, not to mention the danger and reward! We love the theme, and though the payouts of the lower symbols could be higher, the addition of the potentially game-changing bonus round takes care of that problem!