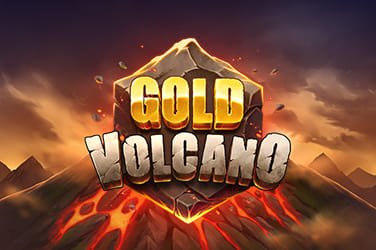 Hold onto your hats and run for cover, because the Gold Volcano is a-rumbling, and it’s only a matter of time before it blows its top! This slot presents a few well-worn slot mechanics in a way you’ve never seen before in this stylish and well-designed game from industry veterans Play N Go, boasting engaging gameplay and explosive prizes to go with it.

But is this slot hot stuff, or are you going to get your fingers burned? Let’s take a look at our Gold Volcano slot game review.

There’s nothing subtle about the looks of this slot, and starring front and centre is the volcano of the title, looming over the background alongside two other peaks while lava pours from a huge opening in the front over the reels. The whole theme to this slot is pretty geological thanks to the shiny gemstones that make up the high-value symbols on the reels, while the low-value symbols are generic card suits made to look vaguely like they’re made of rock. The soundtrack to Gold Volcano is a highly strung action movie theme while booming sound effects as the volcano erupts and explodes all add to the general feeling of danger.

The most obvious thing to notice about the Gold Volcano slot game is that it has an unusual layout, with eight columns that make the grid look a bit like the volcano that sits behind the reels. It’s no surprise that this volcano is going to blow at some point, but it’s the act of getting there that brings in the cash, with a 96.2% RTP promising decent returns for brave players. This game operates a cascading reels feature that removes winning combinations, allowing new symbols to fall onto the reels, but in this game, they come from below like lava flowing into a volcano. At this first stage of the game, the volcano is dormant, though features can be triggered at random with effects such as shuffling symbols to create wins and adding extra symbols or wilds. The rest of the game is in effect a drawn-out bonus round, and that’s where things get explosive.

Landing enough winning combinations will randomly trigger the Pressure stage of the bonus round, which randomly adds wilds to missing symbols created by winning spins, some of which have 2x multipliers attached. As well as this, the pressure will build inside the Gold Volcano with each winning spin you land in a row, visible to the player as lava rising behind the reels and taking over each row. Six consecutive winning spins will result in the Eruption bonus, causing the lava to bubble over out of the volcano and the reels to expand into an eight by eight format in which you’ll have seven free spins. Alongside these bonuses, the crystallization bonus also comes into play, activated when you land three gold rock scatters, which transforms a group of low paying symbols into more gold rocks.

Gold Volcano is a lot of fun to play thanks to its inventive theme that cleverly uses its mechanics to bring the volcano concept to life. While it relies heavily on the bonus rounds to make money, it’s not terribly difficult to trigger and it’s great fun trying to build the pressure and advance to higher levels where the real cash lives!