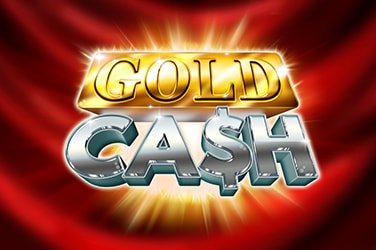 Gold Cash definitely belongs to that list of modern slot games that try to recapture the joy and excitement of retro slot machines, using old-style symbols and simple game mechanics that focus on the part where you win money.

This slot does bring updated graphics and mechanics, though not what you might be used to in modern games, but what it really excels at is the bread and butter of slots: frequent wins, great prizes and plenty of danger along the way. So is Gold Cash a winner or a loser? Let’s find out in our Gold Cash slot game review.

Gold Cash might be a retro slot at heart but that doesn’t mean it can’t bring plenty of style to brighten up your slots experience. This game looks every inch the VIP experience, and every symbol is related to the tons of cash you’re aiming to win, with everything from stacks of notes to towers of gold bars making up the high-value symbols. The low-value symbols are just the generic 9 – A, but thanks to the deep red background reminiscent of velvet you won’t ever feel like they made this slot on the cheap! The sounds are a bit generic and there isn’t much in the way of movement, but did you come here to win money or watch a movie?

Obviously, you’re here to stuff your pockets with cash, so you’ll be pleased to learn that this slot doesn’t put much in the way of you doing that. The Gold Cash slot game has a simple five-reel, three-row layout with a nice high 40 pay lines to play on. The maximum bet is also nice and high at £/€/$100 per spin, meaning that you can win a massive maximum of £/€/$250,000 on a single spin if you land five of the pound coin scatters. That’s not a one-off either, because even the second-highest paying gold stack symbol will payout 1000x your stake, so there are plenty of chances to win big prizes. No wonder the RTP is nice and above average at 96.5%!

The one downside about playing retro-themed games like Gold Cash is the relative lack of features as compared with modern games, which are often overflowing with them. There are no free spins or picks and wins in this game, but there is a nifty little gamble feature that might interest you! Any win you make in this game can be gambled via the simple mechanism of double or nothing, and you can keep gambling the amount as much as you like, meaning you can keep doubling and doubling over and over again until you lose or lose your nerve and cash out. It’s a great way of turning a good prize into an amazing one if you’ve got the stomach for it!

Gold Cash is a game that does the simple things well, rather than having ambitions to be a AAA video game or a blockbuster movie. It may not be overloaded with features but it plays well, features some excellent prizes and doesn’t take practice to figure out. If you like a bit more spice to go with your slots you can always use the gamble feature, and make yourself some truly stunning wins!