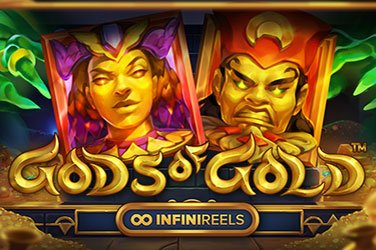 We’re off to the mystical Middle East in this latest NetEnt slot, which packs a huge amount of content into a spooky but masterfully executed theme. Gods of Gold Infinireels really is a slot for those who have it all, because what could be better than infinite chances to win?

Combine that exciting mechanic with some excellent visuals, cool animations and an atmospheric soundtrack and you’re on to a winner. But will you gain the Gods’ favour or are you damned? Let’s take a look at our Gods of Gold Infinireels slot game review.

Take your pick of fictional locations Gods of Gold Infinireels could be set in Aladdin’s Cave of Wonders, Ali Baba’s magic cave, the court of the kings of Persia. While this slot isn’t specific you definitely get a strong Middle Eastern vibe from the design, which combines excellently drawn visuals with some really imaginative theming. Jewels set in stone comprise the lower value symbols, while the higher value symbols are made up of the faces of the Gods which draw influence from Mesopotamian, Arabian and even Indian traditions in their headwear and looks. The background is spooky, abandoned-looking grotto strewn with gold objects and coins, and the whole things is brought to life by the animations and sound, as the reels slam into place, a creepy genie messes with the symbols with a ghostly pair of hands, and the symbols flash and spark as you make combos.

The real talking point here is the Infinireels mechanic, which for those unfamiliar with the concept is a system that tacks on extra reels every time you generate another consecutive winning spin. This can theoretically go on forever, adding more and more reels until eventually, you land a non-winning spin, at which point your total score is added up and you start again on a three by three grid. This is fun enough on its own, but there are also a couple of additional goodies: the last chance mechanic which sometimes gives you a losing re-spin to keep going, the genie sometimes gives you a free winning spin, and you sometimes get an extra few reels slammed on the end of your grid just for the heck of it! It can be a bit confusing trying to work out whether this system is better than a regular slot or not, but with a slightly above average RTP of 96.12% you can have faith that there is cash to be won!

This madness might seem like enough to be getting on with, but the Gods of Gold Infinireels slot game has one more trick up its sleeve to help you get rich. The scatter in this game is a pearl surrounded by a golden mount, which awards you ten free spins when three land on the reels simultaneously. Even better, each scatter that lands during your free spins grants you five guaranteed winning spins!

Gods of Gold Infinireels is a real breath of fresh air, bringing a really fun new slot concept and making it look fantastic with some amazing prizes possible. There aren’t many slots experiences to rival watching your reels grow and grow, and the fantastic prizes you can get at the end just add the icing to the cake.