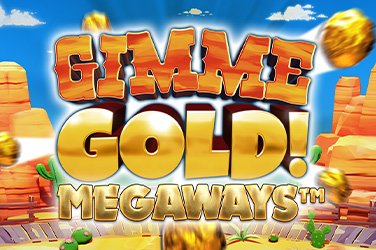 Perhaps unsurprisingly given the name of this online slot game, Gimmie Gold Megaways slot game from Inspired Gaming features a mining theme and one that has been provided in a rather fun visual way.

The developers have adopted some rather cartoon-style graphics, which proved to be a hit with the team doing this Gimmie Gold Megaways review, as it provided an added element of fun and excitement to the overall gameplay experience when it was being played.

Indeed, there are a total of 6 reels available to try and land winning symbols on, although as it is part of the Megaways family, Casino77 players familiar with the way these slot games work will already know that there is the potential to win from 117,649 different ways!

A minimum wager of $/€/£0.20 per spin is required to play this game, however our Gimmie Gold Megaways slot review team also found that a maximum bet of $/€/£10 could also be placed, thus making this perfect for those players who do not want to spend big amounts on each spin that they make.

Our Gimme Gold Megaways slot game review team found that there are a number of different symbols available on the paytable of this Inspired Gaming title.

The first to be found are the traditional royal playing card icons that have been designed in a traditional Western theme, whilst there are then followed by solid gold carts, pickaxes, shovels and a prospector sign that can provide rewards when just two appear.

The explosion wild can only appear on the upper reel, but it has the ability to substitute for all icons to help form additional wins, except for the bonus scatter icon that is available.

With plenty of different Gimmie Gold Megaways bonuses available to choose from, there is plenty that players can be able to get excited about when playing this online slot game.

The first that many will notice is the ‘Cascading Reels’ feature. Whilst many may know this as the ‘Tumbling Reels’ mechanism, this bonus is incredibly popular with Megaways games and it is not a surprise that it has been included in this game. Any win that is formed will disappear from the playing grid and allow new symbols to drop down to potentially form even more wins during that single spin.

There are also a number of ‘Mystery Symbols’ available in this Gimmie Gold Megaways slot game, with these being able to appear in both the base game and the ‘Free Spins’ game. Once all the reels have stopped spinning and mystery symbols appear, they will be transformed into the same icon, thus increasing the potential of picking up a winning combination.

The ‘Free Spins’ game is triggered when 4 or more of the scatter icons land anywhere on the grid in a single spin. Players will receive a total of 12 free spins with an unlimited multiplier being provided as it can increase by 1x per winning spin that is made.

If players land additional scatters in this game, they will be able to make 2 further free spins, with it possible to win up to 80 free spins in total!

When doing our Gimmie Gold Megaways review, the team found that the return to player (RTP) rate for this Inspired Gaming title stands at 95.5% and features a high volatility level.

With the potential to win up to 80 free spins, as well as an unlimited multiplier, it would be wrong to miss out on this game!